A Look Ahead at the Improved Fairbanks Avenue Interchange 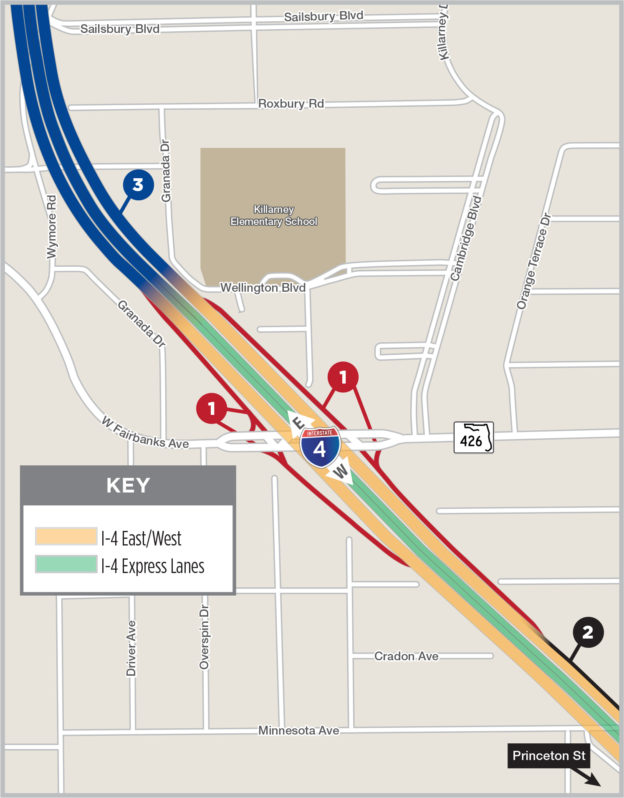 Getting to your favorite places in Winter Park and beyond will be easier and safer once the improved Fairbanks Avenue interchange is completed.

The Florida Department of Transportation (FDOT) recognizes that the Fairbanks curve, the curved portion of Interstate 4 (I-4) just north of the interchange, requires some changes. Motorists often experience increased traffic congestion on this stretch of I-4. FDOT is using the I-4 Ultimate project as an opportunity to address these concerns.

The improvements will realign the curve and create more even elevations so that motorists will have better sight distance. Nearby streets must be realigned to accommodate the new Fairbanks curve. Roxbury Road will dead end instead of connecting to Wymore Road underneath I-4. To compensate for the lost connection, Riddle Drive will cross under I-4 and connect to Granada Drive. Wymore Road, Salisbury Boulevard and Wellington Boulevard will be shifted to make room for the expansion of I-4.

The I-4 Ultimate project improvements will lengthen the I-4 entrance and exit ramps to better distribute vehicles, which will reduce congestion.

Additionally, an eastbound I-4 auxiliary lane between Par Street and Fairbanks Avenue is being constructed to allow for safer and easier merging.

To see the upcoming improvements at the Fairbanks Avenue interchange and other interchanges along the 21-mile project, visit i4ultimate.com/fairbanks.