Borrowing Sand to Build I-4 Ultimate 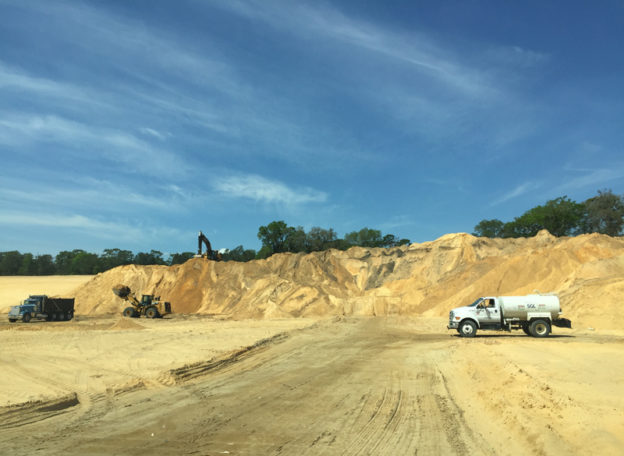 Via @i4Ultimate: Want to learn what a borrow pit is, and how sand plays a crucial role in #I4Ultimate construction? http://fdot.tips/2vQPRL9

For those building the I-4 Ultimate project, the word “sand” does not convey instability, as in the phrase “the shifting sands.”

Sand, in fact, represents a stable, dependable, compactable material – one that forms the foundation of some of the largest structures on the 21-mile improvement project. Why is simple, plentiful sand so important?

To ensure the stability of roadways, bridges and flyovers, the I-4 Ultimate team not only has to put steel pilings and concrete support structures deep in the ground, but the team actually has to build up the foundations and roadbeds upon which the new roadway will sit.

Central Florida soils often contain a good deal of organic matter – materials that can decompose over time. That can cause the ground to shift under heavy structures. The decaying matter also can release chemicals that corrode metallic support structures.

The construction team must import the sand from elsewhere. “That permits for better compaction and assures that metal straps on the bridge approaches and raised roadways stay strong and won’t be impacted by decaying organics,” said Timothy Copple, Borrow Pit Manager for SGL – the construction joint partnership of Skanska, Granite and Lane.

So far the I-4 Ultimate team has used 2.2 million cubic yards of sand (as measured while still in the ground) and the team expects to use another 4.5 million cubic yards before completion in 2021. That’s enough to fill the Great Pyramid of Giza twice.

In the construction trades, the sand is said to be borrowed, so the place or mine where it comes from is called a borrow pit. Some of the sand used on the I-4 Ultimate project has come from a borrow pit in Apopka.

The team works to select borrow pit locations in environmentally responsible ways. “We make it a priority to find pit locations that represent our strong commitment to the environment,” said Russ Handler, Communications Coordinator for SGL. “That’s exactly what we have done when selecting the pit at the Apopka Northwest Recreational Complex.”

In the future, the Apopka location will store reclaimed water that will support migratory birds, local wildlife and complement the adjacent recreation park, Handler said.