Bridge Girders Set at Highest Point of I-4 and S.R. 408 Interchange 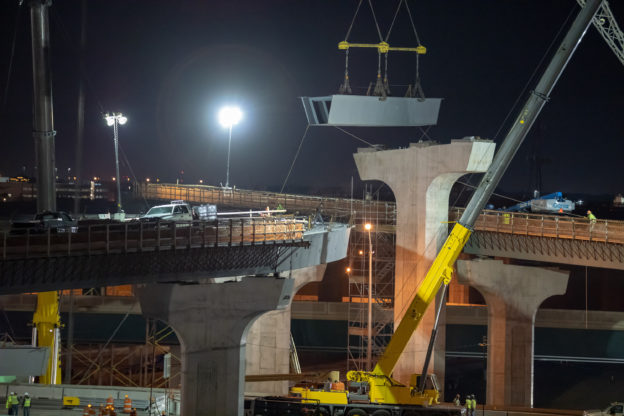 Nighttime crews capped the tallest pier on the entire I-4 Ultimate project when they set its first bridge girders in place during the weekend of December 7.

Nine girders were set during the weekend of December 7. Dozens more need to be placed to complete the support structure for the westbound S.R. 408 flyover ramp to westbound I-4. But progress continues at the interchange as girder placement is almost two-thirds complete, with 200 girders set to date — not including the ones in other parts of downtown Orlando. When finished, there will be 2.2 miles of tub girders to support the flyover ramps at the I-4 and S.R. 408 interchange. (Tub girders are the large U-shaped beams that support the flyover ramps.)

While a series of interim improvements to the I-4 and S.R. 408 occurred more than a decade ago as part of the Trans4mation project, many of those changes helped lay the foundation for today’s I-4 Ultimate project. As funding became available, the I-4 Ultimate project became a reality in 2015. However, planning by the Florida Department of Transportation (FDOT) to improve the I-4 corridor through downtown Orlando started much earlier.

Interested in watching the progress of the new I-4 and S.R. 408 interchange? Log on to i4ultimate.com/cameras to view the live video feed of this interchange.