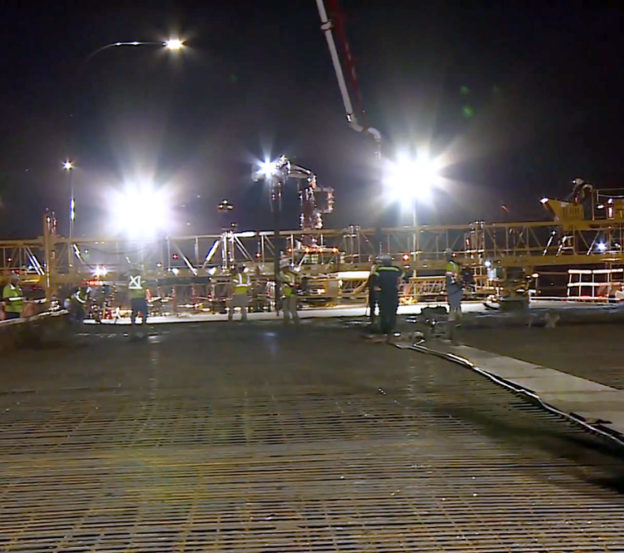 A new eastbound Interstate 4 (I-4) bridge over Ivanhoe Boulevard is nearly complete thanks in part to some complicated nighttime construction.

During the night of October 30, I-4 Ultimate workers from Area 3 of the project successfully completed a continuous pour of 450 cubic yards of concrete onto the new bridge deck. The 21-mile I-4 Ultimate project includes four construction areas. Area 3 runs from Ivanhoe Boulevard to just before Maitland Boulevard.

The eastbound I-4 bridge over Ivanhoe Boulevard is the longest span in Area 3. The slightly curving bridge also contains one of the longest concrete girders in the state. The outside girder holding up the bridge deck is more than 200 feet long. Two 300-ton cranes were required to pick up the massive beam and set it into place.

The concrete pour began at 8:30 p.m. Timing was critical for success during the five-hour operation. Crews must correctly position the concrete pumper trucks so the long boom on each truck can reach every area of the bridge deck.

As concrete trucks begin to feed the pumper trucks, crews atop the bridge deck evenly distribute concrete across the deck. Crews work to load the concrete on the bridge deck about 50 feet ahead of the Bid-Well – a huge smoothing machine. This massive yellow machine stretches across the bridge deck. It can weigh more than 10,000 pounds and may take two days to assemble and test on the bridges. The apparatus includes augers and drum rollers attached to an overhead truss, which moves ahead slowly to flatten out the 8-inch-deep, wet concrete.

The I-4 Ultimate project is revamping, reconstructing or building anew more than 140 bridges. Each brings its own set of challenges. For the bridge extending over Ivanhoe Boulevard, the biggest issue for project engineers was constructing the new eastbound I-4 bridge when the existing eastbound I-4 lanes were in the way.

Next time you are driving eastbound I-4 approaching Lake Ivanhoe, take a quick look at the new bridge. It is on your right and about 10 feet higher than the current travel lanes. You will notice a couple girders still need to be set before the new eastbound I-4 bridge deck over Ivanhoe Boulevard is complete. A traffic shift on eastbound I-4 in 2018 will open a new work zone so workers can finish the remaining portion of the bridge.