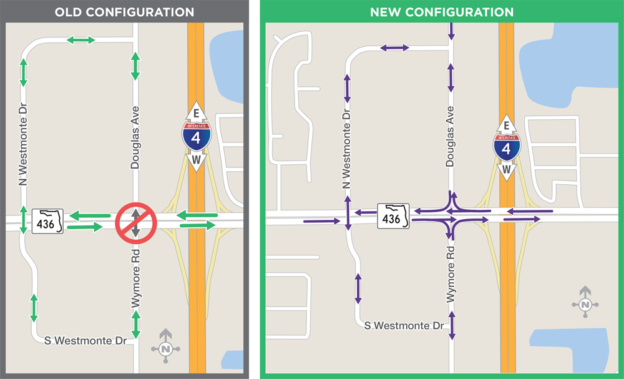 Traffic Will no Longer be Able to Cross S.R. 436 from Douglas Ave. and Wymore Rd.

To improve traffic flow at the State Road (S.R.) 436 and Interstate 4 (I-4) interchange nearby roads and traffic movements must shift.

As soon as Saturday, July 28, 2018, a new traffic movement will be in place to prepare for the final configuration of the S.R. 436 interchange. The change means traffic will no longer be able to cross S.R. 436 between Wymore Road and Douglas Avenue.

Wymore Road and Douglas Avenue will become right-in, right-out only from S.R. 436. Pedestrians and right-in and right-out traffic will still be guided by the existing traffic signal. Once the S.R. 436 interchange is completed and the pedestrian tunnel opened the traffic signal at S.R. 436 and Wymore Road/Douglas Avenue will be removed to provide more capacity for vehicles accessing I-4 and to improve traffic flow.

Lanes on Westmonte Drive also will be added or widened to accommodate the additional volume of motorists using the roadway. Construction on these roadways began in 2017 in anticipation of motorists using this new traffic movement. The signals throughout these roadways will be adjusted and timed to accommodate the additional capacity.

The final configuration of S.R. 436 will function as a Single Point Urban Interchange (SPUI). This type of interchange helps efficiently move large traffic volumes through an intersection with limited space. The SPUI at S.R. 436 will allow opposing left turns to proceed simultaneously in one single intersection over I-4.

For more information about the new traffic pattern at the Wymore Road-Douglas Avenue and S.R. 436 intersection, visit i4Ultimate.com/douglaswymore.

Via @I4Ultimate: A new temporary traffic pattern at Wymore Rd., Douglas Ave. and Westmonte Dr. will be in place as early as July 28. This will make Douglas Ave. and Wymore Rd. right-in and right-out only to and from S.R. 436. Please see below for details: 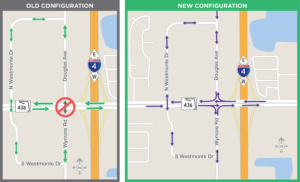 Via @I4Ultimate: On July 28, a new interim traffic pattern will be in place for Wymore Rd., Douglas Ave. and Westmonte Dr. at S.R. 436. See more details on all traffic movements at i4ultimate.com/douglaswymore 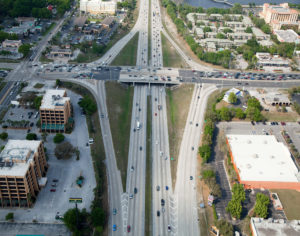 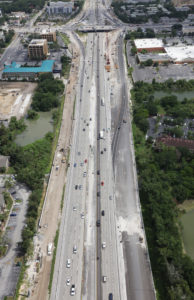