For Father, Daughter and Son, Working on I-4 Project is the Ultimate Family Affair 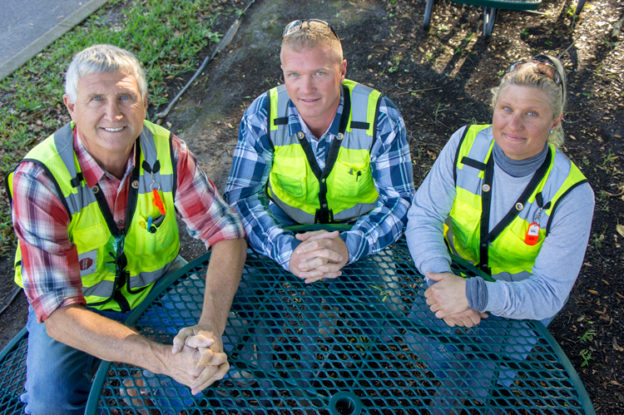 For most of her adult life, Liz Cromelin worked as a server at restaurants and pubs and as a sales clerk in retail jobs. But two years ago, the divorced mother of three decided to put down the trays, step away from the cash registers and pick up a hardhat and tools.

All it took was a nudge from a couple of family members who have been in construction for a long time. That started Cromelin down a path that, in late 2017, would lead to joining her father and brother as members of the I-4 Ultimate construction team. “I think it’s great that we’re sort of building this together,” she said.

For Cromelin, the career change has been a skill builder as well as a reunion. She’s learned proper drainage techniques, to prevent erosion, operate a cherry-picker crane and to build mechanically stabilized earth (MSE) walls. “I found that I like learning how you put things together,” said Cromelin, who had only a slight hesitation in entering a traditionally male field.

For her brother Joshua Nuijens, who is a superintendent in Area 2 of the I-4 Ultimate project, it seems only natural that his sister is one of the approximately 2,000 workers on the job. “We’re real family-orientated,” he said. “And we’re a construction family. So I knew she’d do well.”

For her father, Marty Nuijens, a superintendent in Area 4, having his daughter join the family trade is exciting. All three are now part of SGL – the joint construction venture of Skanska, Granite and Lane.

Marty left California to join the I-4 Ultimate project for both the challenges and rewards of the multiyear project. He explains it simply as, “We’re a family of construction workers,” meaning they follow the flow of work, no matter how hard or far.

“The degree of difficulty on this project is a 9 or 10,” Marty Nuijens said of the 21-mile reconstruction effort. “If you can stick it out on this job, you can do almost anything. But it’s not for everybody.”

So far, though, it’s definitely for Cromelin. She enjoys it so much she wonders why she waited this long to try. “It’s hard work and you have to prove yourself,” Cromelin said. “But women can do these jobs. There’s a lot of opportunity here for women. You just have to have a good head on your shoulders and a good work ethic.”

Her father and brother agree and would like to see more women on the project. “You start at the bottom,” father Marty tells anyone interested in the field. “But if you work hard, there are many avenues for advancement.”

That formula for success is fine by Cromelin. After acquiring several new skills, she is hoping to get even more intense training through the SGL’s on-the-job training program. “I want to learn how bridges are put together and then help build them,” she said. Her advice to women or men considering a construction career. “Follow your dream. Go for it!”

Brother Joshua said the family has yet another goal: Get brother Richard in California to join them when he finishes his current construction project. “We’re working on him.”