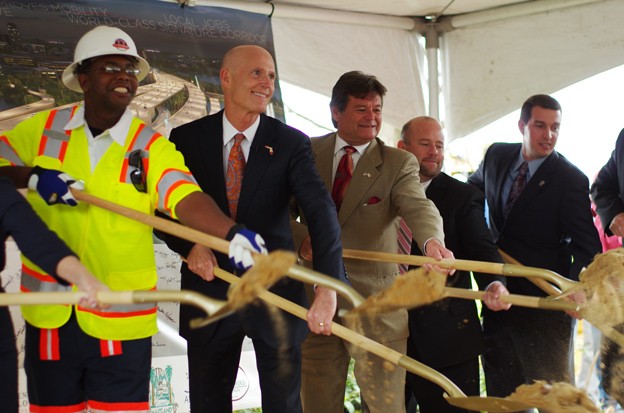 On Feb. 17th, the Florida Department of Transportation (FDOT) officially broke ground on the I-4 Ultimate project. Governor Rick Scott and representatives from more than a dozen local, state and federal agencies were present at the ceremony for the largest infrastructure project in Florida history.

I-4 Ultimate is a landmark project that will transform Central Florida. The project involves rebuilding 21 miles of Interstate 4 (I-4) from Kirkman Road in Orange County to State Road 434 in Seminole County, adding two new dynamic tolled Express Lanes in each direction, replacing more than 140 bridges, reconfiguring 15 major interchanges and reconstructing the entire existing roadway.

Guests to the groundbreaking were welcomed by FDOT District Five Secretary Noranne Downs, P.E. “This project has been going on for over ten years, from concept to literally concrete and asphalt.” Secretary Downs also noted that this project would “not only bring many jobs to Florida, but it will be what we’ve needed for a long time.”

Newly appointed FDOT Secretary Jim Boxold also addressed the crowd, remarking, “I-4 is vital, and people count on it every day to get to and from work. This project will improve the design and engineering of I-4, resulting in a better and safer commute.” Secretary Boxold said FDOT would “work around the clock to ensure that we do all we can to lessen the impact of this project during reconstruction.”

Governor Scott then took the stage and said, “It’s exciting to break ground on the new I-4 project. It’s going to add lanes, it’s going to speed up traffic, it’s going to improve safety.” The governor also introduced Joseph Baldwin, a member of the service patrol working on I-4 Ultimate. “Every job, including this job, impacts a person,” said Governor Scott. “Somebody gets a job, somebody’s life is transformed, somebody is better off because we invest in our state.”

FDOT and I-4 Mobility Partners marked the start of construction, operations and maintenance on Feb. 1. Project completion is anticipated in 2021. As construction hits high gear, motorists are encouraged to visit i4Ultimate.com to sign up for the project newsletter and route-specific alerts to help make informed decisions about when and where to travel. Also, browse our photo gallery from the groundbreaking ceremony.