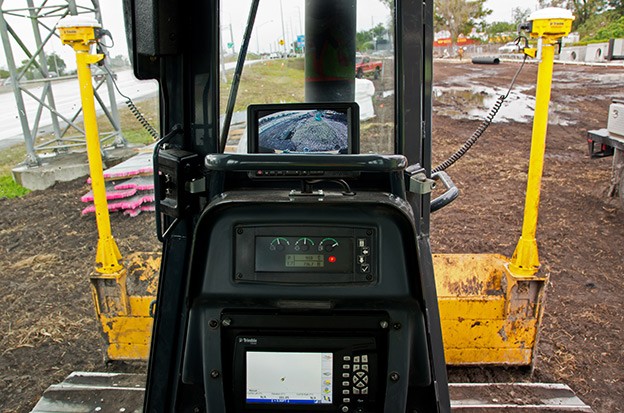 Building the I-4 Ultimate project requires immense precision. Missing by an inch is equivalent to missing by a mile in this field of exact measurements. The difference between well done and a costly redo on the $2.3 billion project may be a matter of little more than the thickness of a nickel.

That’s where the high-tech survey team often helps guide the way. Whether the goal is to even the ground for a smooth roadway or stay within a precise boundary line for safety and efficiency, the survey team produces maps for others to follow during the reconstruction of 21 miles of Interstate 4 (I-4).

“We ultimately provide a 3-D model of the surface that can be viewed on computer screens,” said Steve Langley, Survey Manager for SGL Constructors, the design-build joint venture for the I-4 Ultimate project.

Remarkably, those screens aren’t only on the desks and smartphones that link together the designers, surveyors, field crews and managers. They also are installed in the cabs of heavy equipment operators. Take, for example, the person at the steering wheel of a grader, smoothing the ground for a new highway lane. The operator can view an icon on a built-in screen that shows the exact elevation of the ground and a line indicating the target level. That prevents them from digging down too deeply, which would mean hauling dirt and gravel back to the area and starting over – a very costly mistake. The computerized system also helps eliminate an extra round of traditional survey work.

Langley emphasizes that this is a team effort that starts with plans from designers. The survey team takes digitalized measurements and sharpens the plans down to tiny fractions of an inch, using specialized equipment and knowledge gained from being on the construction site. Indeed, the on-screen system can tell operators when they are within one-eighth of an inch of the target while paving an asphalt or concrete road. That’s about a nickel’s worth of difference that can save tens of thousands of dollars in do-overs.