How I-4 Became the Road Most Traveled 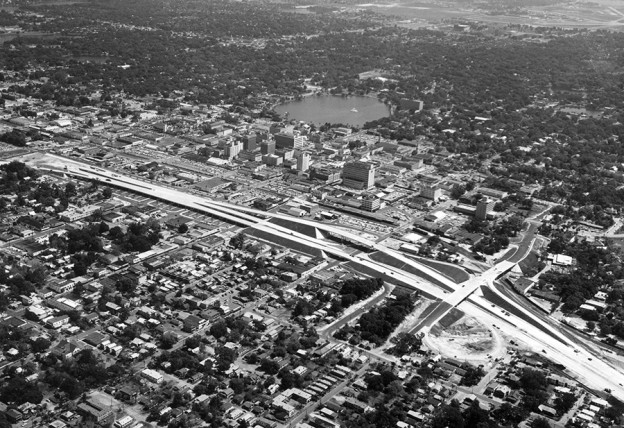 I-4 has undergone quite a transformation since the 1960s, and I-4 Ultimate will continue to improve this vital transportation corridor.

Almost from its inception in 1965, I-4 has been Central Florida’s commuter road of choice. More than 4.5 million Americans made the Sunshine State their vacation destination in the 1950s, with many more becoming full-time Floridians. The decade saw a 79 percent population boom as the good times rolled into the post-World War II era.

A 1954 traffic study identified nearly 195,000 vehicle trips per day in and out of the metro Orlando/Winter Park area. Former President Dwight D. Eisenhower’s Federal-Aid Highway Act of 1956 gave civic leaders the financial backing they needed to build the then-named Orlando Expressway and shape the region for generations to come.

Work on the 8.2-mile interstate project from Rio Grande Avenue, just west of Orange Blossom Trail, to Lee Road began in 1958. Constructed in six segments, the $42.2 million highway was built to handle 70,000 vehicles per day through the downtown Orlando area when it opened in March 1965. I-4 currently handles more than triple that capacity!

The Orlando of today could draw similar comparisons to Ocala were it not for Walt Disney’s November of 1965 announcement that he planned to build a theme park “bigger and better than Disneyland.” From his experiences in California, Disney knew the effect highways had on an area. The freshly paved I-4 provided the perfect conduit for bringing his ambitious vision to life.

Walt Disney World drew 20 million visitors, and employed 13,000 people, in the first two years after opening in 1971. Sea World quickly followed in 1973. The City Beautiful was well on its way to becoming the theme park capital of the world, and I-4 congestion was already a concern.

By the time Universal Studios opened its doors in the early 1990s, roadway engineers were already designing new interchanges that could accommodate up to 10 lanes of traffic. Interim projects, including interchange enhancements and the addition of auxiliary lanes, provided little relief as the population in Orange, Seminole, Osceola and Lake counties swelled to more than 1.8 million by 2000 – an increase from a population of more than 450,000 in 1965.

The appeal of Central Florida isn’t expected to fade into the sunset anytime soon. Forbes magazine recently ranked the metro area the eighth best big city for jobs in the country. As Orlando continues to grow, I-4 Ultimate will meet the need for better transportation, providing motorists with more reliable travel times on the area’s most popular roadway.