I-4 Billboards Go Up Along Project Corridor 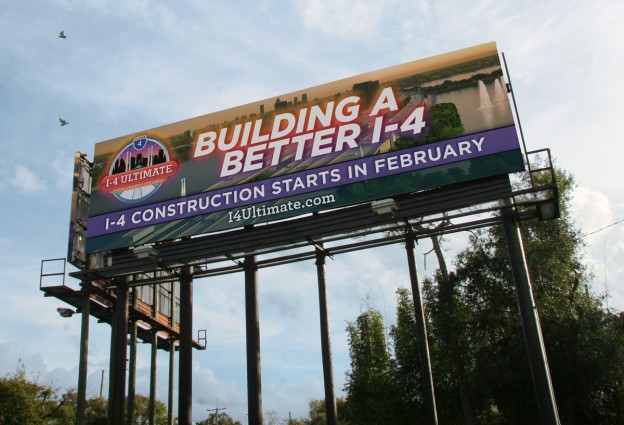 The first week of 2015, eight different billboards were installed along the Interstate 4 (I-4) corridor to inform Central Floridians that I-4 Ultimate construction is starting soon. The billboards contain one of two messages: “I-4 construction starts in February” or “Sign up for alerts at i4Ultimate.com.”

Reaching out to commuters to encourage them to visit the website isn’t the only goal of the billboards. “We know that some people still aren’t aware this project is coming,” says Dave Parks, the I-4 Ultimate public information officer. “Every driver will be impacted by this project, so we need to make sure everyone is informed.”

The billboards are a cost-effective way to increase public awareness about I-4 Ultimate. Since the Florida Department of Transportation (FDOT) owns the billboards, which are located in FDOT-owned right of way, there is no cost associated with the outreach campaign — with the exception of the production and installation of the vinyl for the billboards.

“The fabrication and installation of all seven billboards cost just over $6,000 and has already proven effective in increasing public awareness,” says Parks. In fact, since the billboards were installed, traffic on i4Ultimate.com has increased from a 2014 average of 221 visits per day to an average of over 1,200 daily visits! And drivers are heeding the message to sign up for route-specific email and text alerts — more than 500 signed up in the week following the billboards installation alone.

The billboards will remain until the land is needed to widen the road, so drivers will continue to have a daily reminder to sign up for alerts.