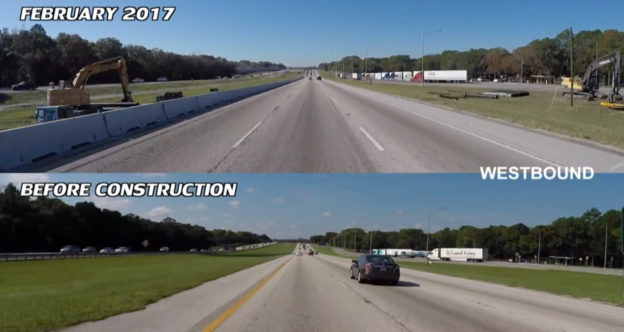 After breaking ground on Feb. 17, 2015, the I-4 Ultimate project has steadily gained momentum, as workers revamp, rebuild and expand 21 miles of Interstate 4 (I-4) to increase safety and mobility for motorists and improve connections between communities.

When the project finishes in 2021, it will feature 15 major rebuilt interchanges, 140 bridges reconstructed or replaced and four dynamically tolled express lanes (two in each direction). That will increase the total number of lanes from six to 10 in the $2.3 billion public-private project overseen by the Florida Department of Transportation (FDOT).

“Our message to commuters and residents is that we are on track, on time and continuing to progress as quickly and safely as possible,” said Loreen Bobo, P.E., who is FDOT’s Construction Program Manager for the project.

Bobo praised the professionalism of the I-4 Ultimate team and the patience of commuters and travelers, as the team builds temporary ramps, helps plan and conducts rolling roadblocks and continues construction while keeping six lanes open during daylight hours, which can include heavy travel periods.

“We’ve had one hurricane, many powerful thunderstorms and dozens of holidays that have stopped or limited our work hours, but we are right on schedule,” Bobo said. “We will continue to work as safely and as efficiently as possible to create a memorable corridor for residents and motorists. And we thank the community for its patience and for its appreciation of our ultimate goal.”

While the I-4 team remains committed to maintaining the safety of workers and drivers, FDOT also reminds motorists to stay alert for traffic shifts and message signs during the ongoing construction of the largest infrastructure project in Florida’s history.

For much of the first year, work focused on underground structures and support – all the networks of piping and pilings that create the foundation for later work. Large pipes carry off stormwater, preventing the pavement from flooding. Steel pilings, driven underground, help support roads, bridges and ramps, stabilizing the structure for decades to come.

While underground work will continue and remain hidden from view, the I-4 Ultimate construction team has also made many noticeable changes above ground all along the 21-mile project that ranges from west of Kirkman Road to east of State Road (S.R.) 434.

The complete list of significant accomplishments is too long to mention here. However, some of the highlights include significant changes in Maitland, where work is requiring 20 shifts in traffic patterns, and at the interchange with S.R. 408 – a complicated effort within a tight workspace in downtown Orlando.

Work also is underway to build a signature bridge over I-4 at Lake Ivanhoe to function as a gateway to the City Beautiful and a specially designed pedestrian bridge in Maitland.

New bridges have been built over New Hampshire Street, Kirkman Road and several others are heading toward completion. New ramps were opened on several roads, including Fairbanks Avenue (S.R. 426) and Lee Road (S.R. 423). Moreover, there will be even greater changes during the third year of construction.