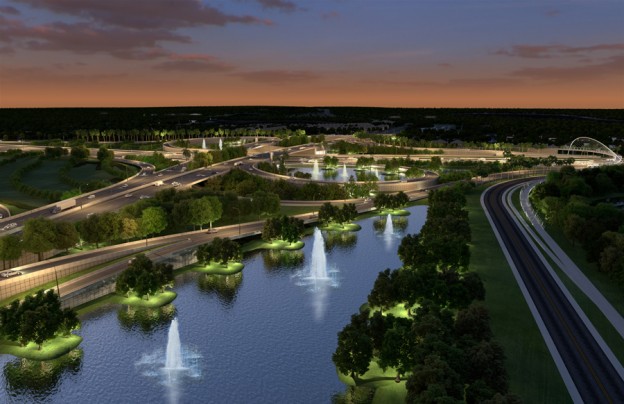 Elements like lighting and fountains contribute to the transformation of I-4 into a signature corridor, complete with increased capacity, smoother traffic flow and improved aesthetics. Maitland Boulevard looking west to I-4 is depicted above.

The largest infrastructure project in Florida history is about to break ground.

Construction on I-4 Ultimate is scheduled to begin in early 2015. The project will rebuild 21 miles of I-4 from west of Kirkman Road in Orange County to east of State Road (SR) 434 in Seminole County, add two new dynamic tolled Express Lanes in each direction, replace more than 140 bridges, reconfigure 15 major interchanges, reconstruct the entire existing roadway and increase the posted speed to 55 mph.

The project is expected to be complete in 2021, meaning the backbone of transportation in Central Florida will be under construction for six and a half years.

“This is a very aggressive schedule,” says Loreen Bobo, P.E., I-4 Ultimate Construction Program Manager. “We are designing and constructing 250 lane miles in less than seven years.” By using the public-private partnership mechanism – which is a contractual agreement between a public agency and a private sector proposer or bidder – the Florida Department of Transportation can deliver this project to the public 17 years sooner than traditional funding methods.

As construction ramps up, drivers will see crews overbuilding the roadway’s shoulder, pile driving and relocating utilities. By summertime, major shifts in traffic patterns and phases will occur. Drivers will need to pay attention to signage and are encouraged to visit i4Ultimate.com for the latest construction information. Commuters are encouraged to plan routes ahead of time or apply some new strategies, like carpooling or taking SunRail, to get them where they need to go.

Keeping traffic moving is crucial to the success of this project. The project team is committed to maintaining the same number of lanes that exist today while working to build a better I-4. To ensure that motorists can get where they need to go, lane closures will be limited to mostly nighttime hours, beginning as early as 8:30 p.m. and continuing as late as 7 a.m. Once major construction begins, drivers should expect temporary roadways, bridges and ramps, and continued traffic pattern changes and shifts. Work may also require ramp closures for extended periods. However, successive ramps may not be closed at the same time, and detours will be provided.

Additional project information, including a full list of lane and ramp closures, will be posted on i4Ultimate.com. Now is the time for Central Floridians to sign up for project newsletters and personalized alerts to help make informed decisions about when and where to travel.