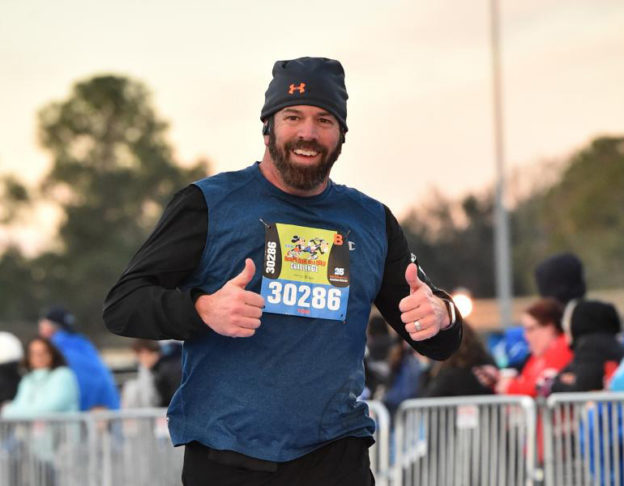 After being diagnosed with a dangerous skin cancer of the scalp that required surgery under full anesthesia last year, Tom Whitney, P.E., searched for ways to celebrate his recovery. And he wanted to check an item off his bucket list.

Having run a few marathons and having been born in Boston – though raised in Orlando – Whitney decided to enter the renowned Boston Marathon to mark the fact he was cancer-free. But when he looked at the qualifying times, he saw he’d have to cut about 20 minutes from his personal best to get in. And that just was not realistic.

Then he read how serious runners also can enter the April race as part of a fundraising team. He checked the approved groups and found one – Impact Melanoma – dedicated to preventing the malignant skin cancer. Perfect, he thought. Seemed like fate. “Somebody is putting this together for me.”

With that, the I-4 Ultimate senior materials engineer also had a way to raise awareness of melanoma – a potentially fatal affliction often caused by exposure to the sun. Whitney was never reckless in the sun; he always wore a hat outside. But now he takes extra care to wear long sleeves, whenever possible, and always uses a good sunblock lotion. “I used to think this only happened to elderly people who spent all day sunbathing,” said Whitney, who was 45 when doctors discovered the melanoma last year.

Impact Melanoma is sponsoring the Running for Cover fundraising team for the Boston Marathon; Whitney is the only member from Florida. He shared his story, including a photo of his sutured head following surgery, on CrowdRise – part of the well-known GoFundMe platform. He hopes to raise $10,000 for running the marathon April 16.

A graduate of the University of Central Florida with a degree in engineering, Whitney works for Elipsis Engineering as a sub-consultant to HNTB, which is the Construction Oversight Services consultant to FDOT. As a senior materials engineer, he ensures that proper materials are used in the correct manner on the I-4 Ultimate project.

Although he doesn’t get on his soapbox at work, he hopes to share his cautionary tale with those who spend time outdoors at work or play.

“We need better awareness,” Whitney said. “I have a small realm of influence. But if this gets one person to go to the dermatologist for a checkup, then that’s good.”