I-4 Ultimate Project Progress is Significant 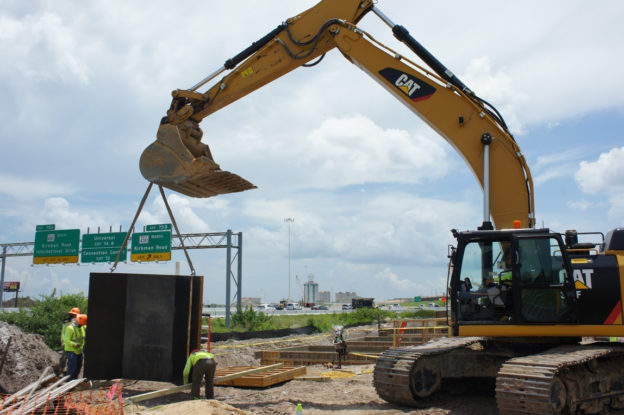 Via @I4Ultimate: Construction is progressing throughout the I-4 Ultimate project: http://fdot.tips/2cGNMH7

More than a year into the job, the I-4 Ultimate project is humming right along toward its scheduled completion in 2021.

By literally working night and day, the team keeps reaching new milestones. These have included placing girders over Interstate 4 (I-4) for the first new interchange bridge (northbound Kirkman Road/State Road 435), first concrete pour for a new bridge (westbound I-4 bridge over New Hampshire Street) and the first major traffic shift (westbound I-4 near Colonial Drive/State Road 50).

“Despite a few weeks of stormy weather, construction is progressing on schedule,” said Loreen Bobo, P.E., I-4 Ultimate Construction Program Manager for the Florida Department of Transportation (FDOT). “Dividing the 21-mile project into four separate construction areas has proven to be beneficial to maintaining the accelerated timeline.”

While FDOT oversees the work closely, each of the four designated areas has its own construction office, construction program and work crews. The following is a brief overview of the progress made in the four construction areas of the I-4 Ultimate project, known as Attractions, Downtown, Ivanhoe and Altamonte.

Construction on the Kirkman Road interchange is ongoing. Kirkman Road bridges over westbound I-4 are nearing completion. In addition, bridge construction has begun on the overpass connecting Grand National Drive and Caravan Court, which is slated to be open to traffic in 2017. A new westbound I-4 exit ramp to northbound Kirkman Road was opened in August. While the traffic configuration to the new ramp is temporary, the new ramp is in the footprint of the permanent I-4 exit ramp.

As the busiest part of the roadway with the most complicated tasks, the Downtown construction area includes nearly half of the 140 bridges that must be built or reconstructed for the entire project. New temporary bridges are currently being constructed between westbound and eastbound I-4 from South Street to Pine Street. The first girders are scheduled to be placed in the coming month with the new bridges possibly opening before the New Year.

The path to project completion for Area 2 lies in the way of the interchange of I-4 and State Road (S.R.) 408. Deemed to be the entire project’s most critical path, this area also requires the longest sequence of activities. Work is ongoing to widen S.R. 408 for new ramp connections and to remove the old westbound S.R. 408 on-ramp from Lucerne Circle. Further to the north, work is continuing on the Colonial Drive interchange and the surrounding area. A portion of Garland Avenue, north of Colonial Drive, is currently closed to relocate utilities, install drainage and dry ponds, realign Garland Avenue, and reconstruct the Colonial Drive interchange including a new eastbound I-4 entrance ramp.

The Ivanhoe construction team is building the project’s most iconic bridge stretching over Lake Ivanhoe, the gateway to downtown Orlando. Construction is progressing in the Ivanhoe area with bridge work occurring at nearly each/every interchange, including Princeton Street, Par Street, Fairbanks Avenue (S.R. 426) and Lee Road (S.R. 423). New temporary exit ramps from eastbound I-4 recently opened at several of these interchanges, including Princeton Street, Fairbanks Avenue and Lee Road.