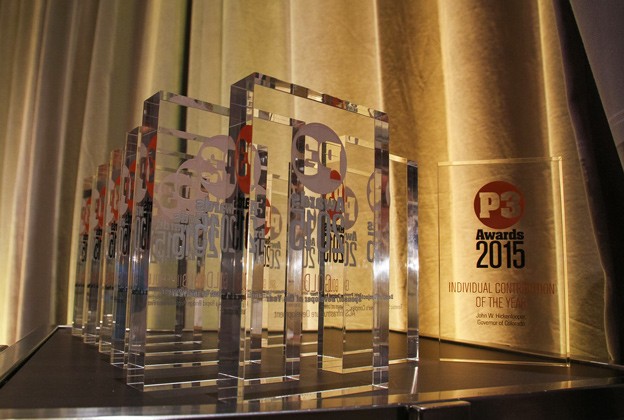 The Florida Department of Transportation (FDOT) and its I-4 Ultimate project were honored at the 2015 North American P3 (public-private partnerships) Awards held on October 8 in New York City.

“We are extremely proud of the recognition the I-4 Ultimate project has received to date,” said Loreen Bobo, P.E., I-4 Ultimate Construction Program Manager. “This award validates the hard work we’ve put into developing this P3 project for Central Florida and gives us added momentum to see this project to its successful completion.”

The second annual P3 Awards recognized outstanding achievements in public-private partnerships across Canada, USA and Latin America. More than 80 entries were submitted for a variety of categories.

The I-4 Ultimate project was awarded the Silver Award in the category for “Best Transport Project.” According to the P3 Awards program, the I-4 Ultimate project, “stands out due to its scale and complexity. The judges liked the flexibility that was built into the contract, and highlighted the effective transfer of risk in the project to the private sector. Despite being a large, landmark project for Florida, the judges were impressed the project reached financial close quickly. The fact the P3 model meant the project could be delivered 20 years sooner than under conventional procurement was considered by the judges to be a compelling example of the benefits of the P3 model.”

FDOT was awarded the Silver Award in the category of “Government Agency of the Year.” The awards program reads, “The department’s flagship I-4 Ultimate P3 project was hailed as a well-executed and well-structured deal by the judges. Florida DOT continues to add to the already long list of successful P3 projects within the department which incorporate cost savings and strong long-term partnerships.”