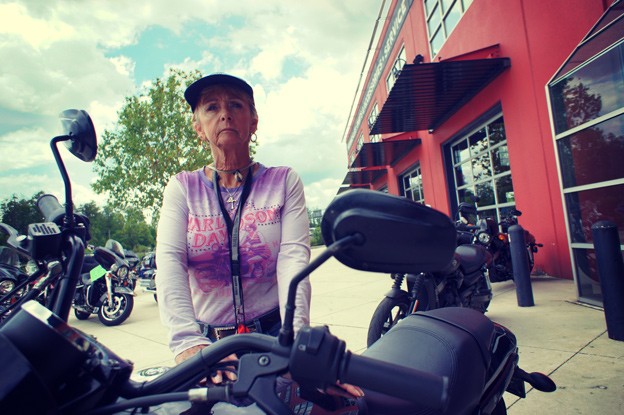 Whether you’re driving on two wheels, four wheels or more, it’s crucial to bear in mind the safety implications of sharing the road.

May is Motorcycle Safety Awareness Month, and the Florida Department of Transportation (FDOT) and those working on the I-4 Ultimate project are reminding motorcyclists and other motorists to be mutually respectful of each other and vigilant in work zones.

All drivers should reduce their distractions and focus on driving, said Donna Werning, senior rider coach with Orlando Harley-Davidson.

Work zones may require an extra level of caution, she noted.

“We only have two wheels to maintain traction. If you’re riding in a construction zone at night it can be hard to see grading in the pavement,” Werning said. “If someone pulls out in front of you, depending on the grooves or how deep the grading is, a sudden stop could take you down.”

“One of the most deadly things we see people do is park under an overpass for cover during hard rain,” Werning said. “They should try to exit as soon as possible. If other drivers see the overpass, they might go under it as well, but they might not see the stopped motorcycle. Look for the first off ramp.”

She encourages motorcyclists to be alert and confident with their level of visibility.

“It’s up to the rider to decide which lane they want to drive in,” Werning said. “You have to weigh your risk factors. I don’t want to be in a lane where people are constantly merging. The middle lane is good for visibility, but you could get trapped. This is all up the motorcyclist. We need to be diligent with our scanning behaviors to compensate for distracted drivers.”

Weaving in and out of traffic is not safe, and should be avoided, she noted.

“If I feel trapped by cars, I might want to move and get increased visibility,” Werning said. “But it should be done responsibly.”

Proper gear should be worn, too, she explained.

“Helmet, gloves, long sleeves or jacket, pants, eye protection are all important,” Werning said. “You dress for the fall but hope it never happens.”

In Florida, all motorcyclists must were eye-protection devices, use headlights during the day and have a seat and footrest for a passenger, if applicable.

Florida law does not permit motorcyclists to wear earphones while driving or overtake and pass in the same lane occupied by the vehicle being overtaken.

Helmets are not required for riders over age 21 with a minimum of a $10,000 in medical insurance, but the National Highway Traffic Safety Administration encourages motorcyclists to “ride safely and ride smartly.”

With 558,123 people who own a motorcycle, Florida is second only to California, according to the Department of Motor Vehicles.

“The motorcycling community is growing,” she said. “I’ve traveled most of the country on a motorcycle, and it truly is an experience. You see and feel everything so much more.”