I-4 Ultimate Team Builds a Home for Ospreys 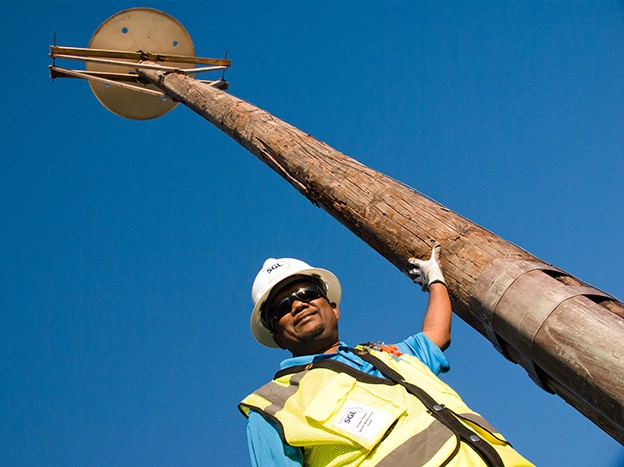 When members of the I-4 Ultimate team inspected an overhead highway sign near Lake Ivanhoe they noticed it held an osprey nest.

The sign was scheduled to be removed as part of the 21-mile reconstruction of Interstate 4 (I-4). The nest did not have any eggs or young birds, but there was evidence of recent activity. That meant that action was necessary. The crew had been trained to deal with encounters with wildlife. They knew they had a duty to the birds, which are protected by the federal Migratory Bird Treaty Act.

“We knew we needed to do the right thing and follow all the guidelines,” said Brian Seecharan, Area 3 Project Engineer for SGL Constructors, the design-build joint venture for the I-4 Ultimate Project. “We were glad to be doing something for the environment.”

They consulted with Matt Baumann, environmental manager for SGL Constructors. Baumann said the team must build an alternative nesting platform at least 15 feet high and no more than 300 feet away from the original nest. After Baumann guided them in securing all the proper government permits, the team found a good spot beside Lake Ivanhoe. After some concerted effort, they found a five-foot-wide, concave, fiberglass dish. The dish was secured atop of an approximately 30-foot-long wooden pole, which was then set firmly in the ground.

Of course, there was no guarantee that the new structure would beckon the birds back. Then a couple weeks ago, the I-4 Ultimate team got good news. Seecharan was passing by the area, looked up at the big dish and spotted something that made him smile.

“I saw a bird there the other day,” he said. “They are using it. It made me really, really happy.”