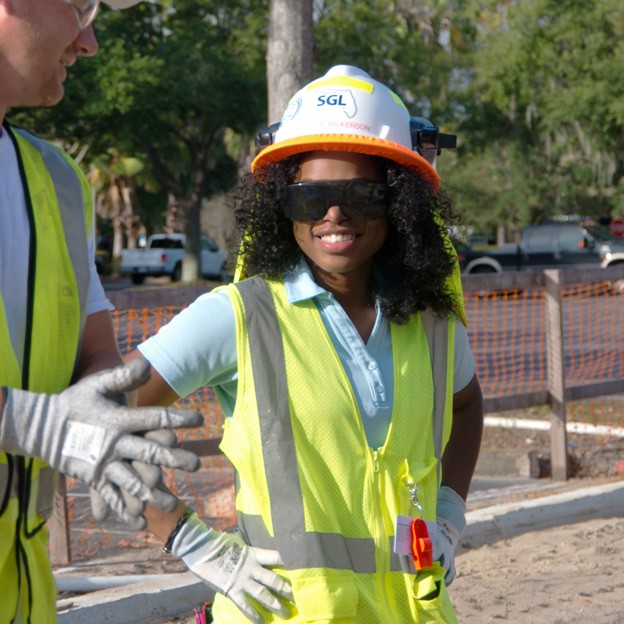 It all started with a box of Lego blocks.

When Krysten Wilkerson was about five, her family noticed how she liked building things, so they gave their little girl some Legos. She scooped up the plastic blocks, built a house and kept on going. Before long, she had assembled every example in the instruction book. Then she started creating her own designs – buildings, wheeled vehicles, nearly anything she could imagine.

Family members loved her creative drive, took photos of the results, and told each other: “Look, what she’s building today!”

Fast-forward 15 years and Wilkerson is still building. Now, though, she’s moved on to much bigger things such as helping to assemble the I-4 Ultimate project – the 21-mile reconstruction job that will improve safety and mobility in Central Florida.

“It was just the excitement of building something and completing it. That’s what landed me here,” said Wilkerson, who now is a lead Field Engineer on the I-4 Ultimate team. She’s also grateful for mentors who steered her toward a degree in construction management at Florida A&M University, where she graduated in 2014.

As she completes her first year on the job, the Altamonte Springs resident is enjoying a wide range of tasks, including overseeing the building of temporary retaining walls, writing daily work plans and developing archiving systems for contracts and other documents, and, of course, helping enforce safety precautions. Among lessons already learned: “You have to cultivate a team environment,” and “effective communication…helps resolve problems to keep the job moving.”

Beyond construction Wilkerson played basketball for her Fort Lauderdale high school team, earned national honors on the FAMU flag football team, and then there’s her sneaker collection. “I’m what you call a sneaker connoisseur.” If you doubt it, just ask her about those Jordan 16 Retros.