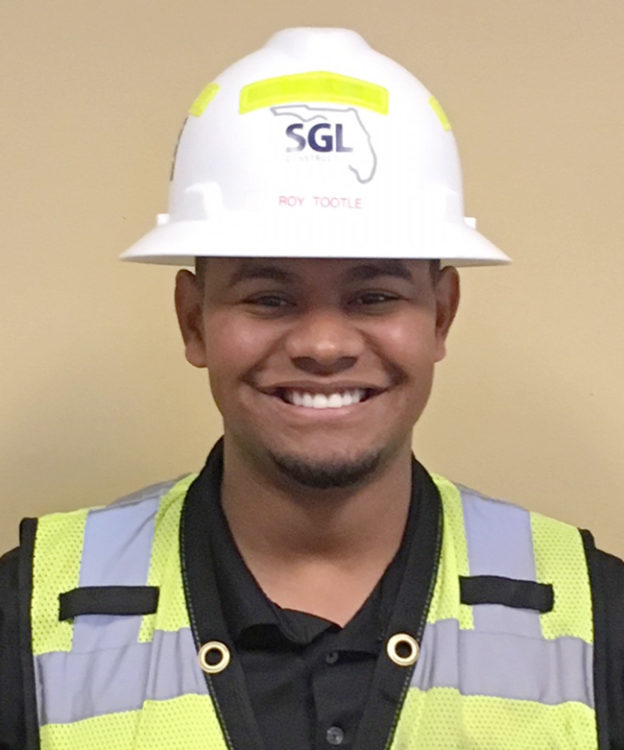 While attending high school in Jacksonville, North Carolina, Roy Tootle started thinking about how to turn two of his interests into an exciting career. From the time he was a kid, he liked to build things, starting with Legos. And, as far back as he could remember, he always loved math.

“I was strong in math. I liked it and it came easy to me,” said Tootle, who is completing his fifth year in the construction business and is a field engineer for Area 4 in the Altamonte Springs area.

While growing up, Tootle also had a role model in his dad, who retired from the Marines as a Master Gunnery Sergeant and who had been, at one time, a combat engineer. So when Tootle realized that the nearby University of North Carolina at Charlotte had an excellent program for civil engineers and that there was a lot of construction going on in that busy city, he figured he had he had found a good place to start out.

After graduating with a civil engineering degree, Tootle was hired by the Lane Construction Corporation. That led to several interesting experiences from supervising bridge crews to working on a light rail project. Four years after college, Tootle arrived in Orlando to be part of SGL – the joint construction venture of Skanska, Granite and Lane on the I-4 Ultimate project.

He has helped to manage or oversee a wide array of work, including nighttime traffic shifts and detours, construction of ground-mounted signs, guardrail installation, drilled shafts, and the trucking of supplies to work sites.

“It’s good to stay busy,” Tootle said. “I like the challenges, and I think it’s good to be well-rounded in this business.” Already, he has dealt with local governments, subcontractors and learned a lot about planning and documenting work processes.

Tootle said he also enjoys talking with people from a variety of companies to hear how they try to improve work efficiencies while maintaining high safety standards. There’s always something new to learn. “It all will help make me a better project manager.”