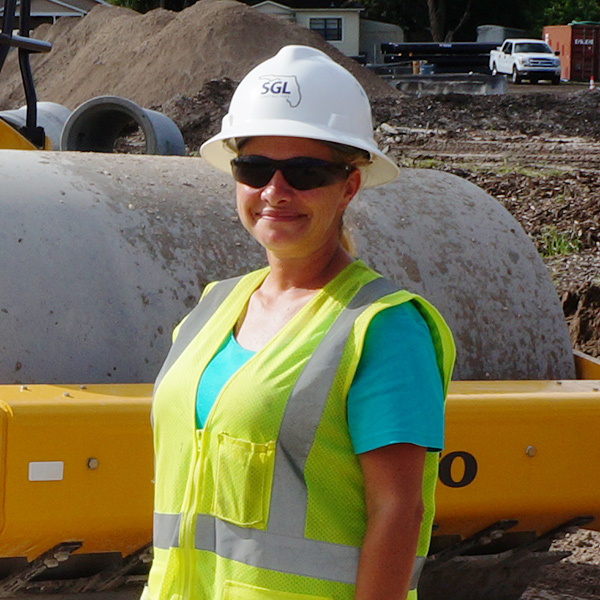 As Tamara Monroe learns to handle the high-tech survey equipment used on the I-4 Ultimate project, she also keeps an eye trained on the new career horizons opening for her in a field she could not have imagined four years ago.

“I want to learn everything I can,” Monroe said of the construction trades. “And go as far as I can.”

In 2012, the single mother of six was working two jobs – as a restaurant server and convenience store clerk – to help support her family when her sister, who was already working in construction, convinced her to apply for a similar job. She loved it.

Monroe never hesitated about going into a male-dominated field, although her two 20-something sons told her they never imagined their mom out in the heat working construction. She replied, “I didn’t either, but that’s what I’m doing.”

She never looked back on her two part-time, indoor jobs. “Nothing out here intimidates me,” Monroe said. “There’s always a challenge out there.”

Having already learned to operate soil compactors and asphalt rollers while working with Lane Construction (one of the partners in SGL – the design-build joint venture of the I-4 Ultimate project), Monroe has continued to add to her skills while working for SGL on the project to rebuild 21 miles of Interstate 4 (I-4).

From managing truck traffic in the borrow pits to operating heavy equipment such as rollers and dump trucks to training with digital surveying equipment, she loves the work. Some hot summer afternoons can be demanding, but the more predictable work hours allow her to spend quality time with her family.

Indeed, Monroe now tells other women about the building trades. After overhearing a female store clerk complain about a job situation, she leaned over the counter and passed along some hard-earned advice.

“I told her, “Construction.’ Maybe they don’t think about it, but they should not be intimidated by the word,” Monroe said. “It’s not a man’s job. It’s your mindset. If you think you can, then you can.”