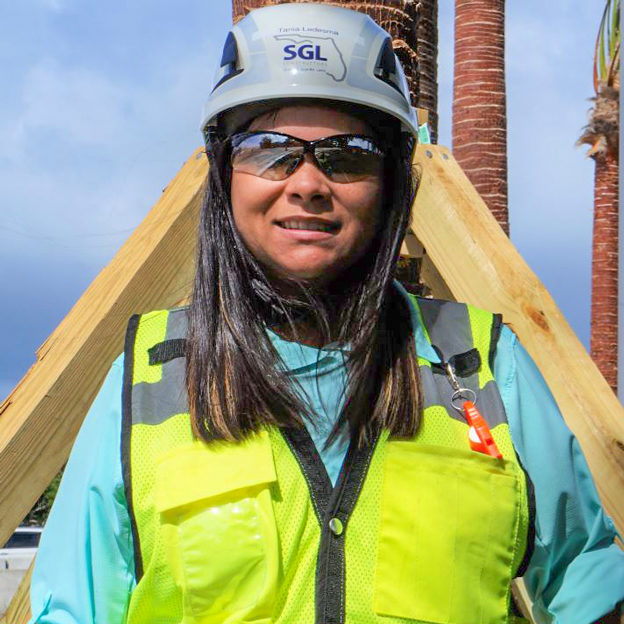 Landscaping gives the project its character

When Project Engineer Tania Ledesma Torres was a youngster in Toa Baja, Puerto Rico, she loved to look at the big highways and bridges that seemed so monumental and led to fascinating places.

“I remember daydreaming during car rides when I saw roads and bridges, and I always dreamed of being part of the team that builds them,” said Torres, who is a project engineer with SGL – the construction joint venture of Skanska, Granite, and Lane for the I‑4 Ultimate Project.

That childhood dream led Torres to Polytechnic University of Puerto Rico and a degree in civil engineering. Eventually, it took her to the I‑4 Ultimate Project.

In April 2017, she started as a Quality Engineer in Segment 4 (Maitland through Longwood). In February of 2018, she was promoted to project-wide Landscape Engineer. That means she manages the planting of 19,000 trees and 13,000 bushes (all part of the $28 million budgeted for landscaping).

With nearly 60 percent of landscaping still to be placed, Torres loves staying busy with a project that uses native and Florida-friendly plants, including many low-maintenance trees and grasses.

“Landscaping gives the project its character,” Torres said. “It provides native habitat and resting and watering areas for local and migrating wildlife, and it is just as essential as the many other elements of the project that I am so proud of.”

She enjoys viewing the results. “I especially love the landscape design and execution in the area of Conroy Road by the Mall at Millennia – the palms, cypress trees, crape myrtles, Japanese blueberries and other beautiful plants that complement the pond.”

Torres appreciates the supportive teamwork, too. “I love to be involved in each phase of this project from design to construction. The work being done here brings me back to my childhood and daydreaming during car rides.”

These days, she doesn’t have much time for daydreaming: “Being mother and wife, my favorite hobby is having quality time with the family; they are everything to me.” But, no doubt, one day she’ll tell her children about the roads in her journey.

“I followed that dream and made it come true, and I am both proud and humbled to be part of one of the largest infrastructure projects in the country at this time.”