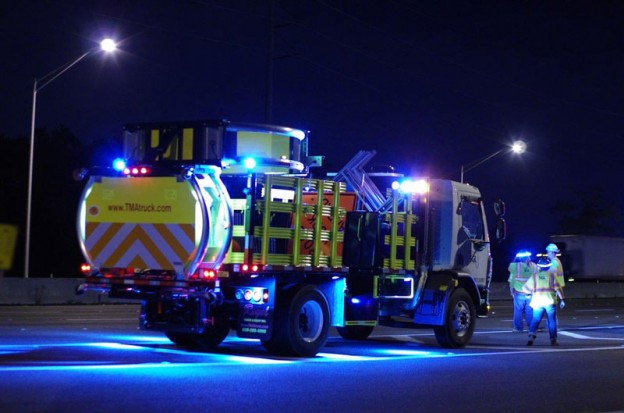 A remarkable truck, designed by members of the I-4 Ultimate team, will help to keep workers and motorists safe during the massive revamping of Interstate 4 through Central Florida.

Known officially as an attenuator truck, this specially designed vehicle is actually several vehicles rolled into one. It can haul an equipment trailer. And it can provide a safe platform for workers who put down or pick up traffic cones. An intercom system allows the driver to communicate with those workers in the back.

The multifaceted truck also has cameras, so the driver can monitor traffic flow and keep a watchful eye on crew members to make sure they remain safe. The cameras and safely mounted display screens allow the driver to monitor nearby vehicles and people without having to turn around.

In addition, the “Scorpion” truck can create a crash protection zone with the attenuator device attached to the rear of the vehicle. The approximately 13-foot-long attenuator is essentially a giant shock-absorbing device that collapses inward to absorb the impact of another vehicle.

The truck’s general concept was the inspiration of two employees of SGL Constructors – part of the I-4 Ultimate team. SGL appears to be the first group to design all of this versatility into one truck. David Feise, the project’s Maintenance of Traffic Manager and Steve Matthews, the project’s Deputy Equipment Manager, combined their knowledge of what’s needed for I-4 Ultimate work and what’s available on the market to help design the special truck.

It must fulfill a larger need, too, as other construction companies are asking to use the design for their projects.