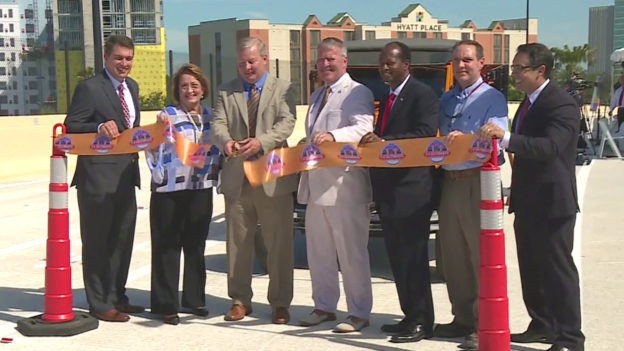 The recently opened Grand National Drive overpass stands as an early example of how the I-4 Ultimate Project can improve safety, mobility and economic possibilities along the 21-mile reconstruction effort.

Orange County Mayor Teresa Jacobs praised the effort that connects the Oak Ridge Road/International Drive area, east of Interstate 4 (I-4), to the Major Boulevard/Caravan Court area, west of I-4. “This new overpass will provide much needed connectivity in a corridor that is so important to our tourism industry and for the region’s overall economic prosperity,” Jacobs said.

She also applauded the overall design of the project that eases congestion and creates a “distinctive and visually appealing corridor,” so that “we enhance the quality of life, the transportation and the desirability of living and traveling here.”

Orlando Mayor Buddy Dyer noted that transportation infrastructure is an ongoing issue in a region with 68 million visitors a year and a very busy I-4 in the middle of it. “I don’t think there is a day that goes by that Mayor Jacobs and I don’t work in some way on that because it is vitally important to the economic vitality of our community and also to the quality of life.”

Dyer also praised the overpass for its wide, safe walkways that can accommodate bike riders and pedestrians, increasing mobility and safety for residents and visitors.

Orlando City Commissioner Samuel Ings, who represents the area around the new overpass said it will stimulate economic growth on both sides of I-4. “This roadway project provides for current and future commercial development in the North International Drive, Oakridge Road, Major Boulevard and Kirkman Road areas,” Ings said.

He also noted how the overpass connects the hotels, shops, restaurants and attractions of International Drive with similar businesses in the Universal Orlando theme park area.

Brook Brookshire, who is I-4 Ultimate Project Director for SGL – the construction joint venture of Skanska, Granite and Lane – highlighted the aims of the project. “Our goal with the I-4 Ultimate Project is to create a signature corridor that connects communities, improves economies and enhances livability and tourism throughout the region,” he said.

Alejandro Pezzini, who is the COO of AMP Group, which operates businesses in the North International Drive area, said the new roadway is much more than simply a commuter shortcut. “The opening of the Grand National Drive overpass will serve as our bridge of economic unity.”

He said the overpass is “a true catalyst of growth” that will encourage more people to visit and return to the area.

Steve Martin, who is the FDOT’s District 5 Secretary, said the I-4 Ultimate project currently is employing 2,000 people. “This event today represents major progress here, as well as all the way up and down the 21-mile corridor,” Martin said.

The overpass was designed to accommodate more than 1,000 vehicles per hour to help ease congestion on the nearby Kirkman Road (State Road 435) interchange. The overpass also includes direct connect ramps to Express Lanes that will open at the completion of the I-4 Ultimate project, scheduled for 2021.