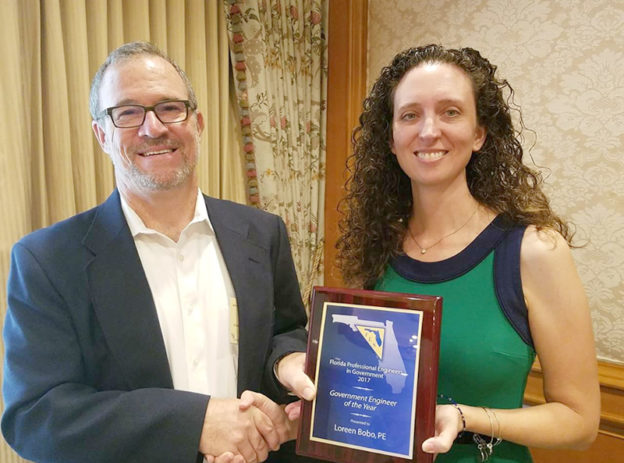 Loreen Bobo, P.E., who is the I-4 Ultimate Construction Program Manager for the Florida Department of Transportation (FDOT), recently earned top honors from the Florida Professional Engineers in Government (FPEG).

The Government Engineer of the Year Award recognizes the nominated engineer who has made the most outstanding contribution to the advancement of engineers in government, according to the organization. Bobo manages the 21-mile reconstruction project that stretches from west of the Kirkman Road interchange in Orange County to east of the State Road 434 interchange in Seminole County.

After receiving the award, Bobo sent out a message of thanks, noting how the project team is working to improve transportation for residents, commuters and visitors. “I am proud to be a professional engineer and proud to work for and represent the people of Florida and those visiting.”

The $2.3 billion effort is a public-private partnership and is considered the largest infrastructure project in Florida history. It currently employs 2,000 people. The project will remake six lanes of interstate, rebuild 140 bridges, reconfigure 15 major intersections and add four Express Lanes – two in each direction. It is scheduled for completion in 2021.

A 1999 graduate of the University of Florida with a Bachelor of Science in Civil Engineering, Bobo began working for the FDOT’s District 5 office in Deland that same year as a professional engineer trainee.

In 2007, Bobo earned her Masters of Science in Industrial Engineering with a focus on Engineering Management from the University of Central Florida.