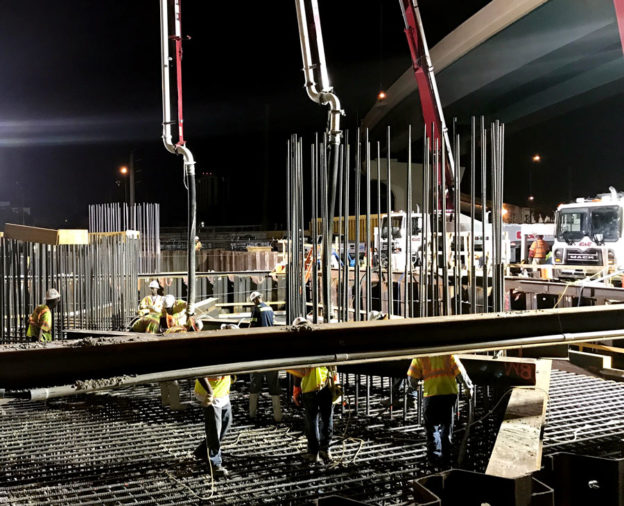 Via @I4Ultimate: Get an inside look at how concrete flyover piers are built on the project. Watch the video here: http://fdot.tips/2u3q0ie

If there was any doubt why the Interstate 4 (I-4) improvement project is called the “Ultimate,” maybe the 100 or so concrete truck trips on the night of May 19 can help drive home the point.

One of the largest continuous concrete pours for the I-4 Ultimate project took place that night as nearly 900-cubic-yards of concrete were pumped into the foundation substructure for two flyover piers at the I-4/State Road (S.R.) 408 interchange. The two piers are some of the tallest at the interchange. One pier is 92-feet-tall and the other 60-feet-tall and they will support flyover ramps from eastbound I-4 to westbound S.R. 408 and eastbound S.R. 408 to westbound I-4.

Two concrete pump trucks with long boom arms and a team of more than a dozen construction workers filled the foundation substructure at a rate of about 120 cubic yards of concrete per hour. Each pump truck was continuously fed concrete from two mixer trucks.

Division Avenue under S.R. 408 was closed for the night to accommodate the queue of concrete trucks and ensure there was no break in the supply of concrete to the pumper trucks. The concrete order was so large that two nearby plants were required to meet the need.

To learn more about the redesigned I-4/S.R. 408 interchange, visit i4ultimate.com/future408.