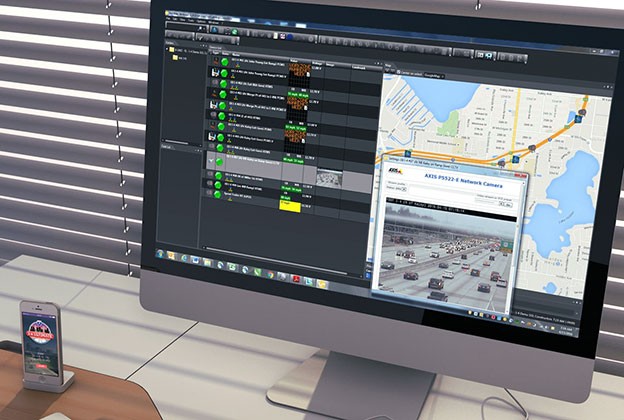 In their ongoing efforts to keep travelers moving safely and traffic flowing efficiently on Interstate 4 (I-4), members of the I-4 Ultimate team have installed the state’s first Smart Work Zone system.

It works like this: Using radar devices and a camera, the system monitors traffic speed along a portion of the I-4 Ultimate project. If it detects congestion or a blocked lane, then it automatically sends warnings to three electronic message signs on the roadside. The lighted display boards alert drivers to possible slowdowns ahead.

The setup is designed to help keep motorists and workers safe through an advanced warning system that helps prevent oncoming drivers from rear-ending slower or stopped traffic. That, in turn, lessens the chances of a vehicle careening out of control and striking a worker.

Consisting of five traffic sensors, three electronic display signs and one pole-mounted camera, the mobile system was installed in April and is being used on a trial basis. The camera allows for the monitoring of traffic flow, but it does not record any video or images.

“I started looking at these in 2015,” said David Feise, who is Project Maintenance of Traffic Manager for SGL Constructors – the design-build joint venture for the I-4 Ultimate project. “Right now, we’re doing a 90-day trial. But if it proves to be a benefit, we’ll look at acquiring a more extensive setup.”

Other safety benefits of the system include allowing the remote access of the ongoing data collection and the remote control of the camera. “That means one less person that you have to send out to the field and work on the shoulder of the road near oncoming traffic,” Feise said.