It also has led to methods that help mitigate noise and vibrations – Techniques that will be used during I-4 Ultimate project. 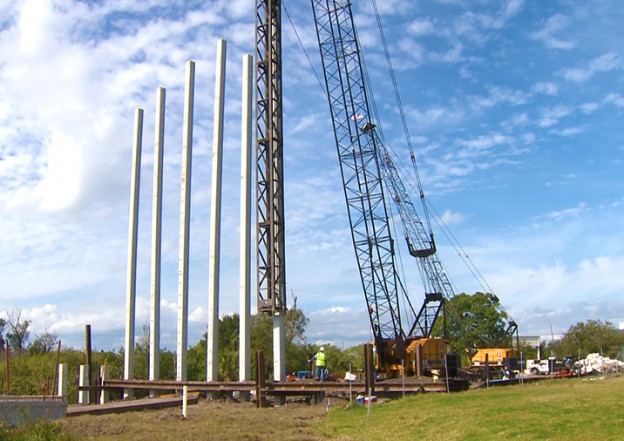 The building of new interstate lanes and bridges will be obvious to motorists during the I-4 Ultimate project, yet a great deal of work also will occur underground.

Though largely unseen, the below-the-surface preparation is essential to the project that is addressing future traffic needs of Central Florida.

The underground structures – usually steel or concrete pilings – are put there to create safe, stable foundations to hold bridges, overpasses, ramps and other structures in place. Approximately 7,000 pilings, ranging from about 40 to 120 feet in length, will be driven into the soil at strategic points along the 21-mile project.

“We are conservative with the thresholds that will set off the monitoring alerts, they are well below the levels that would normally cause structural damage” said Shelley Gisclar, Coordination Engineer with SGL Constructors. “However, people are very sensitive to vibrations, and we can feel vibrations at very low levels – long before they can create any structural damage.

In order to find the most efficient and least disruptive methods of construction in each area of the project, the team studies soil maps, conducts subsurface investigations and analyzes the soil samples from deep borings.

In areas of soft or loose soils, the steel pilings can be “vibrated” into the ground. That allows the pilings to essentially slip into the soil, which is further loosened during the vibrating process.

This technique, known as vibratory pile driving, advances the piles by using a machine with rotating counterweights. Those rotary movements are designed to transmit vertical vibrations to the metal piling as it moves downward. While not an exact analogy, this method could be likened to shaking a butter knife while pressing it into packed sand.

When the steel piles have been vibrated to a predetermined level, they are then driven using a conventional pile-driving hammer to set the piles into the dense bearing soil stratum. Vibratory pile driving through loose soils is typically much quicker than using conventional pile driving equipment, and it doesn’t produce as much ground vibration and noise.

Sometimes it’s difficult to fully predict just how deep the pilings need to go because Central Florida’s soil can vary, even over short distances, said Gisclar, whose professional background is in geotechnical engineering. This final conventional pile driving, or hammering, of the pile into place gives engineers a way ensure that the piles have been placed into the dense bearing soils.

While it’s impossible to negate all noise and vibration, engineers will work to diminish the effects as much as possible by following these steps:

1. For the most part, pile driving operations will take place during the daylight hours to not interfere with sleep.

2. When it is impossible to perform those operations during the day, the nighttime activity will be monitored for noise levels. The Florida Department of Transportation has set a limit of no more than five decibels over the baseline (that is, the ambient or typical) noise levels for the area for a cumulative period of two minutes over a 20 minute span.

4. The seismographs will be equipped with cellular communications, so that if they detect a vibration above the pre-set limit, they can immediately notify a list of personnel, who can respond quickly with necessary adjustments. Keep in mind that the alert thresholds are set significantly below levels that would induce vibration damage.

5. The large, diesel-powered hammers are closely scrutinized. And the downward motion and speed of each piling is precisely measured. In addition, electronic monitors make sure that the hydraulic hammers don’t overstress the pilings. Engineers don’t want the hammers smacking the pilings as hard as possible because that can weaken the steel or concrete. They regulate the power and the speed of the big devices, which, in turn, can lower the noise level and, if necessary, the stresses induced by the hammer.

Readings from the sensors on the pilings that measure rates of movement also help engineers determine if the piles are set deep enough. Where necessary, the machinery can be adjusted to change the force and speed of the hammers.

Once at their proper depths, the upper ends of the piles stick out above ground and become part of a concrete slab that is built around them. That further locks the deeply rooted foundation into place, so it can help support the interstate’s largest structures from below.