Preparations on I-4 Ultimate for Hurricane Season 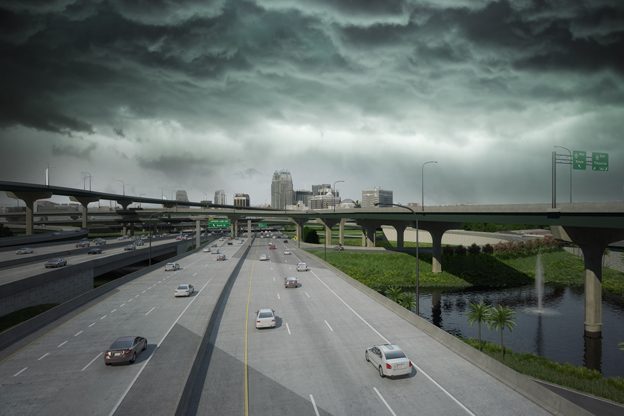 Just like a homeowner preparing for a big storm, the I-4 Ultimate team must make preparations when a hurricane or tropical storm threatens to make landfall and impact Central Florida.

The I-4 Ultimate team has 21-miles of roadway to look after and a set of state-approved policies to follow. Those guidelines are designed to minimize damage while keeping employees safe, essential staff on duty and emergency routes open.

Joseph Morffi, Operations & Maintenance Manager for SGL Constructors and the I-4 Ultimate team, oversees the storm preparation. He has helped to create many such plans during his career.

Significant response begins as early as when the storm starts to produce sustained winds of 40 mph and is within five days of coming ashore. First preparations include stocking up on supplies and making sure that equipment such as trucks, excavators, bulldozers and portable pumps and generators are fueled and in good repair.

The team also reviews plans for carpooling essential employees. These are the people who help with storm mitigation and are available to work during the storm. The idea is to minimize the number of I-4 Ultimate team members who have to drive in bad weather. The plan assigns a few drivers with four-wheel-drive vehicles to do pick up and drop off.

Preparations include securing or removing items such as barrels, barricades, temporary signage or anything else on the job site that strong winds could carry off. Rings of lights on high-mast poles may be lowered to prevent damage during the storm.

The team also has to consider the extra demands made on the drainage system during a storm. Drains are checked for blockages and anything nearby that easily could be swept into the openings, resulting in backups.

There may be fairly large areas of exposed ground or high mounds of dirt on the construction sites. Areas deemed likely to erode in a powerful storm may be covered with a filter fabric to help hold the dirt in place.