A whole new I-4 is coming to Central Florida. Often called the backbone of our transportation system, I-4 is being completely transformed along the 21 miles that stretch from Kirkman Road to State Road 434. As we work to build a better I-4, get ready for four new Express Lanes, reconstructed interchanges, completely rebuilt bridges and an exciting new look and feel!

The first 8.2-mile stretch of I-4 opened in March 1965 and accommodated 70,000 vehicles per day through downtown Orlando.

I-4 is getting a much needed makeover.

Interstate construction finished in 1965 and the interstate was dubbed “the Orlando Expressway.” I-4 in Central Florida began as an 8.2-mile project from Rio Grande Avenue, just west of the Orange Blossom Trail, to Lee Road.

Already a vacation hot spot to more than 4.5 million visitors annually, the Sunshine State’s popularity began skyrocketing in the 1950s with the advent of air-conditioning and the burgeoning space industry in Cape Canaveral. More than 60 new industries moved to Central Florida by the end of the decade, prompting the Census Bureau to declare Orlando’s growth at the time as the “Nation’s Greatest.”

Popularity in tourism gave rise to increased traffic. A traffic study identified nearly 195,000 vehicle trips per day in and out of the metro Orlando/Winter Park area in 1954. Local officials knew a major upgrade would be required to greatly improve the infrastructure.

Originally known as the Orlando Expressway, I-4 was built in six segments at a cost of $42.2 million.

The first of six projects building Orlando’s Expressway began in 1958. Four years later, the final segment began. The project took seven years to complete, which cost $42.2 million. Designed to handle 70,000 vehicles per day through downtown Orlando, the new expressway turned a long 40-minute trip from the suburbs into a quick 10-minute drive to the city’s center.

President Dwight D. Eisenhower later said the Highway Act’s “impact on the American economy — the jobs it would produce in manufacturing and construction, the rural areas it would open up — was beyond calculation.”

Walt Disney World opened the doors to its famous castle in 1971, drawing more than 20 million visitors in its first two years. Sea World followed in 1973 as the once sleepy citrus-growing town of Orlando became the fastest growing city in the state, well on its way to becoming the theme park capital of the world.

Florida grew to become the nation’s fourth most populous state over the next 20 years. More than 900 people per day were picking up and moving to the sunny peninsula in the 1990s. Limited by prohibitive additional purchase costs, FDOT explored the idea of double-decking the interstate to create the 12 to 14 lanes that would be needed to handle projected traffic. It was determined to be a non-viable option.

Interim interchange, reconstruction and auxiliary lane widening projects have augmented the Orlando landscape over the previous 25 years while plans to construct the I-4 Ultimate were underway.

The transformation will meet Central Florida’s demand for an improved interstate. 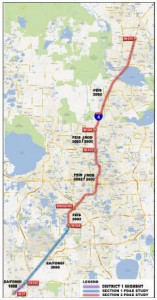 I-4 Ultimate is reconstructing 21 miles of I-4 from Kirkman Road in Orange County to State Road 434 in Seminole County, but did you know FDOT has plans for I-4 Beyond the Ultimate (BtU)? BtU is looking at solutions for traffic congestion east and west of the I-4 Ultimate project area, and the project is close to wrapping up the Project Development and Environment (PD&E) Reevaluation Studies. The part segmented for the next phase is moving into design in 2015. The entire project covers 21.2 miles of I-4 from U.S. 27 in Polk County east to Kirkman Road in Orange County and 19 miles from State Road 434 in Seminole County east to State Road 472 in Volusia County. Funding needed to acquire right of way for two segments – State Road 528 to Kirkman Road and State Road 434 to U.S. 17-92 – is included in FDOT’s five-year work program. I-4 BtU includes some exciting features to improve traffic flow, like a direct connection from I-4 Ultimate’s Express Lanes to proposed Express Lanes on State Road 528, as well as I-4 Express Lanes to State Road 417 and Wekiva Parkway. To learn more about the plans for improvements to I-4 throughout the rest of Seminole, Volusia and Polk counties, visit I4Express.com.