The goal of the I-4 Ultimate project is to create a signature corridor that connects communities, improves economies and enhances livability throughout the region. I-4 Ultimate is designed to improve the function of I-4 and highlight Central Florida’s rich history, community character and beautiful landscaping. Explore this section of the website to learn more about how this distinct and memorable design will reinforce mobility, enhance the driver’s experience, engage communities and maximize accessibility.

The I-4 Ultimate project is transforming Central Florida. Easing congestion is one of the primary goals of the project, but there are plenty of other exciting elements of the project: 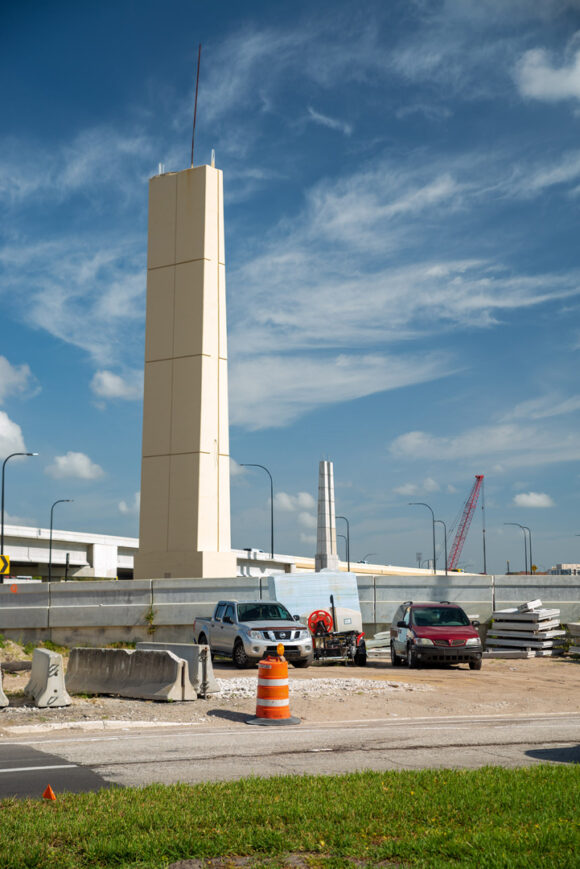 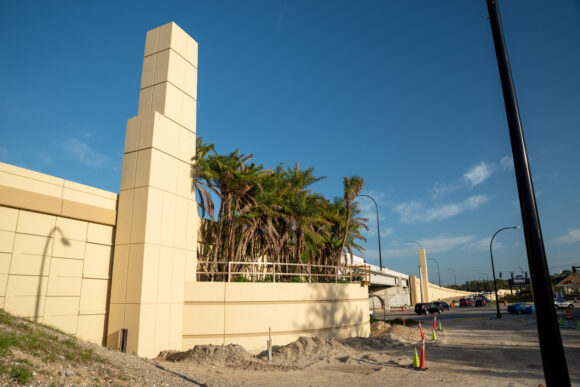 A variety of enhanced pylons will be seen throughout the I-4 corridor upon completion of the I-4 Ultimate Project. Some — such as those that are coming to Central Parkway, Ivanhoe Boulevard, and Grand National Drive — will include special lighting features and will indicate where direct connect express lanes ramps can be accessed. Other enhanced pylons will be part of localized beautification enhancements. These pylons will be placed on bridges at Michigan Street, through downtown Orlando, Princeton Street, and State Roads (S.R.) 436 and 434. 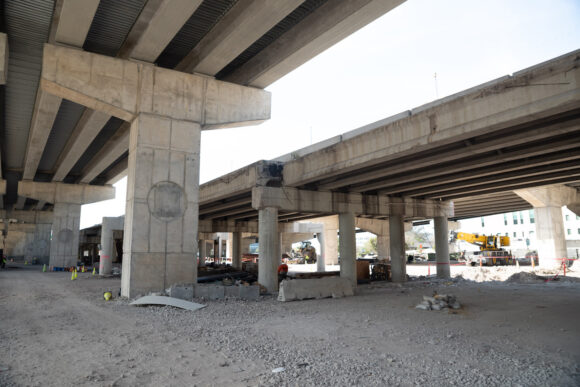 Bridge supports throughout the improved I-4 corridor will feature a variety of enhancements, including foliage planters, pylons, and decorative architecture. Some of the most dramatic improvements will be seen at Lake Ivanhoe, also called the “gateway to downtown,” Colonial Drive (S.R. 50), and downtown between Robinson Street and Amway Arena.

The bridge at Kennedy Boulevard will feature special messaging to honor the historic Town of Eatonville, the first self-governing, all-black municipality in the United States.

Roadway lighting will include LED lights that vary in intensity depending on the area to be illuminated. The heads can be single or twin. The poles are mounted on pedestals, bridges, or barrier wall and are between 30 and 45 feet high. 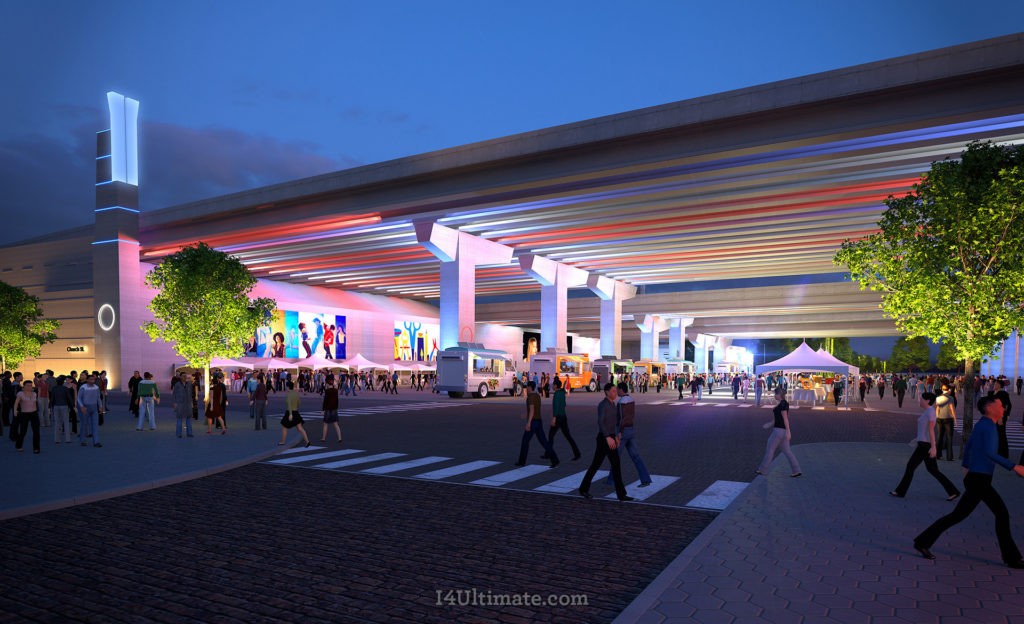 There is under-deck lighting on most of the bridges within the project. Colored lighting under the I-4 Church Street overpass will provide a festive atmosphere and the colors will be adjustable to correspond to various events (i.e. purple for Orlando City soccer games, blue for Orlando Magic basketball, green for St. Patrick’s Day celebrations, etc.).

There is landscape lighting at many locations such as in enhanced bridge planters and within interchanges. Various trees will have up-lighting. Areas such as Ivanhoe will undergo visible aesthetic improvements with new lighting features that will accentuate the updated landscape.

Landscaping features throughout the I-4 Ultimate Project will be updated to include native plants, which require less maintenance. Enhanced bridge supports through the project will include built-in planters for trees and other greenery.

The Kirkman Road area will see some of the most widespread landscaping along its various retention ponds, providing a welcoming sight for theme park visitors and others entering the southern part of the project. 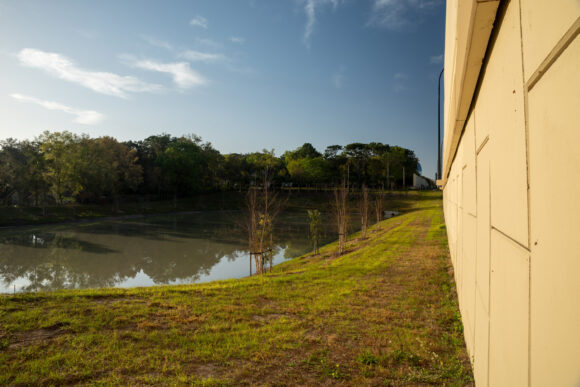 The landscaping is diverse, with buffer trees, including holly and magnolia, as well as canopy trees, such as oak and elm. Flowering trees, including crepe myrtle, will add color. Palms are common throughout the area, and eight types of palms will be used on the project. Transitional trees, such as maple and cypress, and shrubs and colorful ground coverings, including plumbago and pink muhly, also will be planted. Most of these plants are low maintenance.

There will be decorative sidewalks in the downtown area. 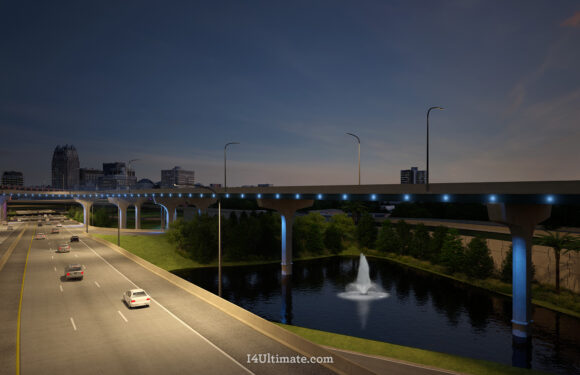 Motorists will notice beautiful new water features throughout the corridor upon completion of the I-4 Ultimate Project. Planned locations for these features include the Ivanhoe area, the Maitland Boulevard and Kirkman Road interchanges, and downtown where I-4 connects to S.R. 408.

In addition to special water features, the entire project will feature many new or enlarged ponds for improved drainage.

The Florida Department of Transportation (FDOT) is making great gains in technological advancements and safety. FDOT is also raising the standard for how other state departments of transportation generate new and better value for every transportation dollar invested. The I-4 Ultimate project is no exception.

Alternative technical concepts are proposed changes to basic configurations, the project scope, design and construction criteria, and provide an approach that is equal to or better than the requirements requested by FDOT.

I-4 Mobility Partners are focusing on innovation on Interstate 4 (I-4) to enhance:

Below are a few highlights of how the I-4 Ultimate project is embracing innovation throughout the corridor: 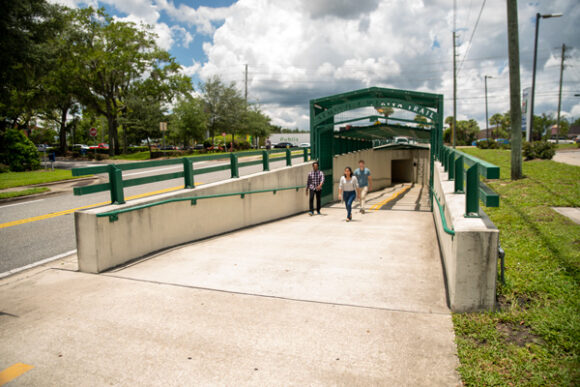 A pedestrian tunnel under State Road (S.R.) 436 between Douglas Avenue/Wymore Road and I-4 adds a unique safety feature for those on foot crossing the busy roadway. On an average day, 48,500 vehicles travel through the S.R. 436 at Douglas Avenue intersection. The pedestrian tunnel will help keep the walking public safe as they cross at least six lanes of traffic. The tunnel also improves the flow of traffic by eliminating the need for motorists to yield to pedestrians. 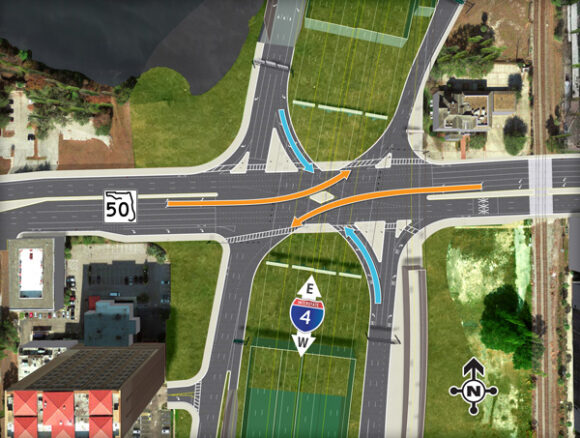 Thousands of cars but just one set of traffic signals — that’s how two of the 15 major interchanges along I-4 will operate when the I-4 Ultimate project is complete. The S.R. 436 and Colonial Drive (S.R. 50) interchanges will each be reconstructed as single point urban interchanges (SPUIs) to move cars through tight areas — such as Downtown Orlando or Altamonte Springs — as efficiently as possible.

Originating in Texas, these highway configurations can be found around the nation. Central Florida drivers may have already driven the U-turns in place at the intersections of U.S. Highway 17-92 and State Road (S.R.) 436 and S.R. 50 and S.R. 436.

The movement allows drivers traveling on a one-way frontage road to U-turn in an opposite direction frontage road without waiting at a traffic signal. 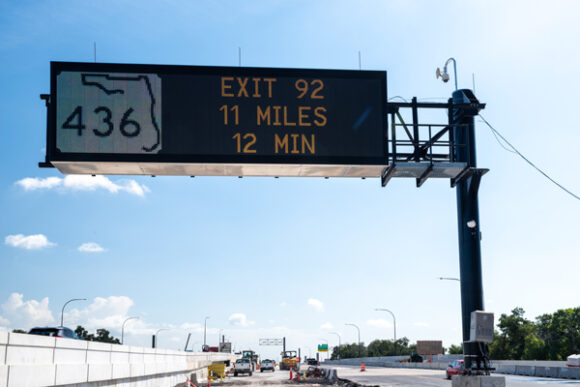 I-4 Ultimate is one of the first highway re-builds to include advance traffic management technology in the design. Sensors and traffic cameras that enable FDOT to monitor traffic conditions in real time are built into other infrastructure, including overhead sign trusses. Digital communication technology is also built in to I-4 to facilitate traffic monitoring, and to deliver messages to the color dynamic message signs (DMS). It also allows FDOT to deploy, monitor and control ramp signaling in the downtown Orlando area; and to set and communicate toll rates, and collect tolls on the new I-4 Express Lanes.

The I-4 communication network is future looking, too, and will enable FDOT to deploy connected vehicle (CV) technology as CVs become more common. CV technology will allow FDOT to learn more about traffic and roadway conditions, then communicate safety messages directly to vehicles.

Ramp signaling is a way to reduce crashes at an on-ramp to I-4 while decreasing travel times on I-4. New ramp signals are being installed at 11 on ramps between John Young Parkway and Ivanhoe Boulevard to help improve safety and mobility through downtown Orlando.

A combination of sensors, cameras, and computers controls the frequency of vehicles entering I-4. This creates smoother merging patterns and reduces the need for vehicles on I-4 to slow down. FDOT will activate ramp signaling during heavy congestion. Drivers will stop at the red light at the end of the ramp and two vehicles will proceed on to I-4 when the light turns green. 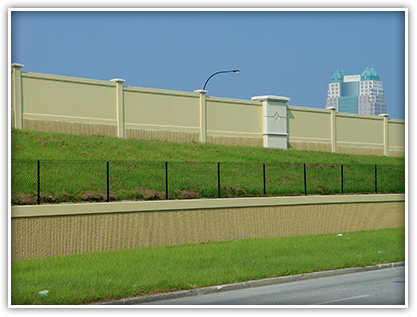 Sound barriers will reduce noise impacts for residential communities adjacent to the I-4 corridor.

The I-4 Ultimate project may include construction of sound barriers to help reduce sound between the interstate and adjacent neighborhoods. Many factors determine sound barrier locations. The Florida Department of Transportation (FDOT) conducted multiple noise studies for the 21-mile I-4 project. Currently, eight locations in Orange and Seminole counties are eligible for sound barriers. A majority of property owners adjacent to the proposed barriers indicated their support for them when surveyed by FDOT. Based upon the completed noise studies, construction of sound barriers is considered for eight residential communities adjacent to I-4.

When is a Noise Study Needed?

A noise study is required when: 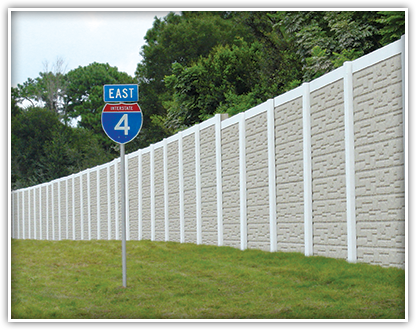 Sound barriers will feature region-specific aesthetics to reinforce the sense of community.

I-4 Ultimate adds new Express Lanes and completely rebuilds the existing general use lanes. The Orange and Seminole counties’ I-4 noise studies used the Federal Highway Administration’s (FHWA) traffic noise model to predict future traffic noise increases with the expansion of I-4. Areas predicted to experience future noise levels of 66 decibels or more have been evaluated for feasibility and cost reasonableness. More analysis is done during design.

What Are Sound Barriers?

Sound barriers are solid obstructions built between the highway and homes along a highway. They do not completely block all noise. They only reduce overall noise levels. Sound barriers are not built to block views of traffic from homes. 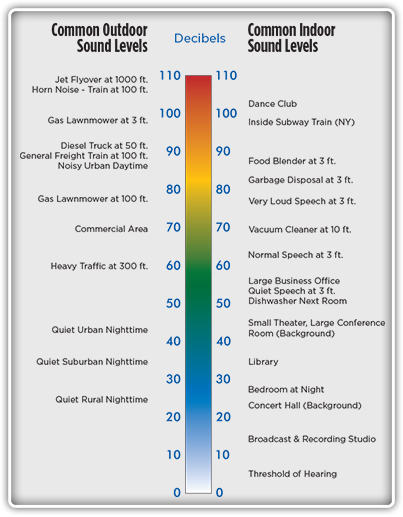 What Will a Sound Barrier Do?

A sound barrier can noticeably reduce traffic noise at homes located within 200 feet of a wall. This area adjacent to the wall is referred to as the “noise reduction zone,” as shown above. The goal of the barrier is to reduce noise by five to ten decibels. The amount of noise reduction depends on:

To learn more about the sound barriers associated with I-4 Ultimate, please review the materials below. 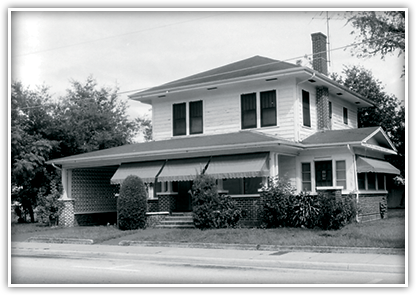 The Wells House in the Holden-Parramore Historic District was once home to one of Orlando’s longest practicing African-American doctors.

Central Florida has a rich history, as demonstrated by hundreds of buildings, districts and sites listed on the National Register of Historic Places. Several of these places are within the project limits of I-4 Ultimate, including the town of Eatonville, Griffin Park and the Holden-Parramore Historic District. Historic preservation is a priority of the I-4 Ultimate project.

The town of Eatonville was the first incorporated African-American town in the United States and was placed on the National Register of Historic Places on February 3, 1998. Founded in 1887, the town has been continuously governed by persons of African-American descent, and the main road — Kennedy Boulevard — once served as a wagon trail. Key landscape and historic features will be integrated into the bridge design at Kennedy Boulevard to honor historic Eatonville. 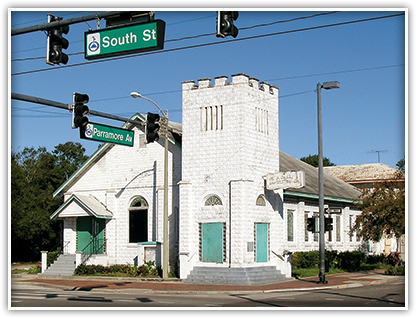 This church at the corner of Parramore Avenue and South Street was originally the site of the first stone church for African-American residents in Orlando.

An interchange redesign at I-4 and State Road 408 lessens the project’s impact on two additional historic resources: Griffin Park and the Holden-Parramore Historic District. Griffin Park, added to the National Register of Historic Places on July 18, 1996, opened in 1940 as the city of Orlando’s first affordable housing project for impoverished African-Americans. The Holden-Parramore neighborhood once served as the segregated African-American section of the city, and several buildings in the area are illustrative of intact historic housing. The Holden-Parramore area was placed on the National Register of Historic Places on September 23, 2009.

Although final design is not yet complete, current plans relocate the ramp from the 408 to westbound I-4 and the ramps from I-4 to westbound 408 to the east side of the Griffin Park apartments. Doing so opens the area under the current ramps to allow for green space or a stormwater retention pond. The planned design will restore the physical cohesiveness to the neighborhood that was lost during the original construction of I-4.

Once I-4 Ultimate is complete, the corridor will be a celebration of local heritage and will serve as a reminder of what makes Central Florida unique.

Drivers and pedestrians will have a more scenic – and cultural – view when traveling on a portion of Interstate 4 (I-4) thanks to the I-4 Ultimate Art Endowment Program that will place public art installations adjacent or near the 21-mile stretch of the I-4 project corridor.

The arts initiative will fund permanent art installations throughout the I-4 Ultimate Project that may be integrated into gateways, highway overpasses, pedestrian bridges, parks and streetscapes.

I-4 Mobility Partners underwrites the $1.5 million Art Endowment Fund. I-4 Mobility Partners was selected by the Florida Department of Transportation (FDOT) to oversee the design, build, finance, operations and maintenance of the public-private partnership I-4 Ultimate Project.

The local beneficiaries and their appropriate public information contacts are as follows:

The allocated endowment funds shall cover all short-term and long-term costs of designing, creating and maintaining the selected art installations. Final artistic creations should be completed and in place by February 2021.