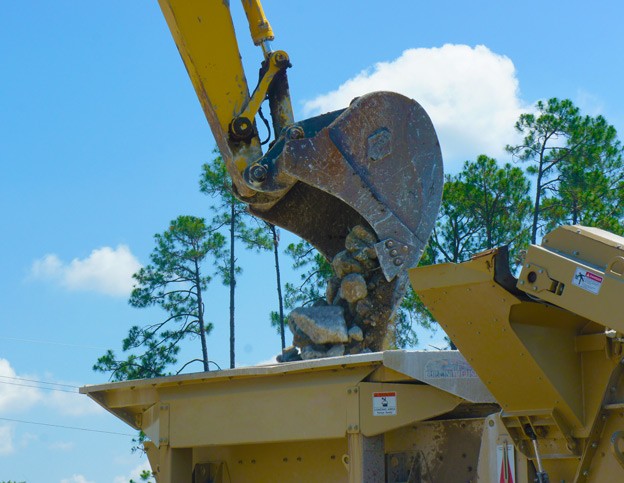 #I4Ultimate is recycling more than 99% of old I-4 concrete - http://goo.gl/lDdxKO

Nearly every inch of concrete pavement along the 21-mile stretch of the I-4 Ultimate project will be replaced by the time the project concludes.

That could mean an enormous amount of dusty waste going into landfills with the added major expense of hauling the heavy stuff a long distance just to dump it. But a forward-looking recycling program now is reusing more than 99 percent of the materials taken from the roads and bridges as they are replaced. That’s even higher than the project’s goal of 98 percent.

Instead of throwing it away, the old pavement is crushed at a nearby location. The pieces then are brought back to the construction area to become part of the foundation or base for the new lanes.

By crushing the large chunks of the old road surface at spots alongside the Interstate 4 (I-4) and reusing it, the team minimizes the environmental impact. “Reusing the concrete means that we’re not filling up landfills,” said Chris DuBois, Area 3 manager for SGL Constructors, the design-build joint venture for the I-4 Ultimate Project. It also lessens the amount of fuel used by trucks.

Even areas with asphalt paving are being recycled. Some of old asphalt is sent to a supplier to reuse in new asphalt mixes. The rest is milled into small pieces to create bedding for temporary roads — lanes that may be needed only for a limited time during construction.

Meanwhile, the steel removed from old concrete goes to recyclers for a variety of uses, and trees and brush become mulch.

“It all minimizes the impact we have on the environment,” said Matt Baumann, environmental manager for SGL. “And the more recycling you can do, the more energy and expenses you can save.”