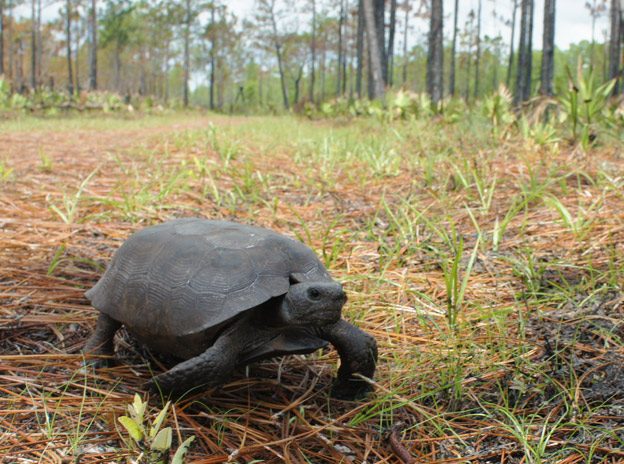 Some 29 gopher tortoises living along Interstate 4 (I-4), have some new digs to call home.

SGL Constructors, the design-build joint venture for the I-4 Ultimate Project, along with the Florida Fish and Wildlife Conservation Commission (FWC) and Florida Forever collaborated to relocate the gopher tortoises to Florida Forever’s nearly 4,000-acre conservatory in St. Cloud.

Gopher tortoises are classified as a threatened species.

The relocation allowed for the tortoises to thrive in a safer environment and for SGL Constructors and other contractors to continue construction.

The tortoises were moved from 101 surveyed burrows, according to Matt Baumann, Environmental Compliance Manager with SGL Constructors. Gopher tortoises often live in several different burrows moving from one to the other.

“We had a pre-construction survey of the burrows,” he said. “Then, an ecological expert verified the active burrows, and we received a permit from FWC to relocate.”

The majority of the tortoises lived within the northernmost limits of the project, such as Maitland or Longwood, Baumann noted.

“We found them by the westbound side of I-4 just south of E.E. Williamson Road,” he said. “The majority are on the north end of the project.”

It costs about $1,800 per tortoise for the relocation including permit fees, recipient site fees and wildlife consultant fees.

But the lives of 29 threatened gopher tortoises are worth it, said Dr. William Broussard, founder and president of Florida Forever and the Alan Broussard Conservatory.

Broussard, a retired ophthalmologist, designated the land southeast of Orlando in 1990 in memory of his son, Allen, who was a wildlife biologist and ecologist.

“About a quarter of our 4,000-acre property is prime gopher tortoise habitat,” Broussard explained. “We’ve taken in about 1,200 tortoises from all over the state in the past six or so years.”

The tortoises graze on low-growing grasses and plant life, which is why they may be attracted to the banks of the I-4 Ultimate project, he noted.

“Their prime habitat is the pine flatwoods,” Broussard said. “We maintain it with controlled burns, too. That’s critical. It allows plant life to replenish. The tortoises then eat the fresh low-growing grass.”

The tortoises can look forward to many years in their natural habitat, as they can live about 50 to 60 years in the wild, he said.

The relocation along I-4 is complete, and barriers were erected to exclude any tortoises trying to return to the construction zone.

Baumann and the I-4 Ultimate team also are on the lookout for eastern indigo snakes, another protected species. So far, they’ve found none.

“But if we do, we’re going to follow the same process with the FWC to make sure they’re OK,” Baumann said.