Remember to Move Over 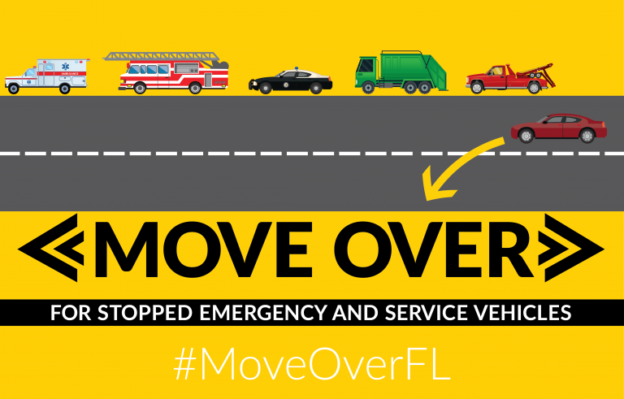 Via @i4Ultimate: Remember to move over a lane when you see an emergency vehicle on side of the road. It’s the law http://fdot.tips/2kq2NBg

What is the easiest and most effective way to help protect law enforcement officers, emergency workers and other public servants while they are performing their duties along Florida’s roadsides? According to the Florida Department of Highway Safety and Motor Vehicles (DHSMV), simply “Move Over, Florida!”

The Florida DHSMV has designated January as Move Over Month to commemorate the state’s Move Over Act of 2002. This important state law requires vehicles to move over a lane for emergency vehicles, sanitation vehicles, utility service vehicles or wreckers. If a driver cannot move over, they should slow down 20 mph below the posted speed limit or slow down to 5 mph when the posted speed limit is 20 mph or less.

In 2014, Move Over violations resulted in more than 160 crashes, 120 serious injuries and multiple deaths on Florida roadways. In addition to endangering law enforcement, first responders, public servants and other motorists, failing to move over can also result in fines and points on a driving record.

To comply with the Move Over Act drivers must be on a: