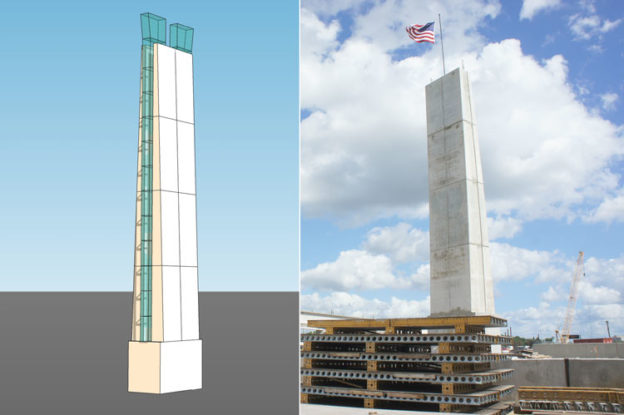 Via @i4Ultimate: New concrete pylon near Lake Ivanhoe first of several to be built http://fdot.tips/pylon

A tall concrete pylon on Interstate (I-4) near Lake Ivanhoe is the first of several to be built along the 21-mile stretch of the I-4 Ultimate Project.

The pylons serve both practical and decorative functions on the corridor being rebuilt and expanded in a public-private partnership managed by the Florida Department of Transportation (FDOT).

On the practical side, the towering posts mark points where motorists can directly connect to Express Lanes from other roadways without entering the general use lanes first. On the decorative side, the 90-foot-tall structures will be shaped in a distinctive way and lit at night to help create a signature corridor.

This first pylon was constructed early in the project so crews wouldn’t have to build it surrounded by new bridges and ramps. Two other tall pylons will be erected later by Grand National Drive in south Orlando, and two more will go up at Central Parkway in Altamonte Springs. Other smaller decorative pylons will be placed throughout the corridor, adding to the project’s aesthetics.

When completed in 2021, the I-4 Ultimate Project will continue to have six non-tolled general use lanes (three in each direction) plus additional auxiliary lanes. The four dynamically tolled Express Lanes (two in each direction) will be priced to maintain 50 mph, according to traffic conditions.