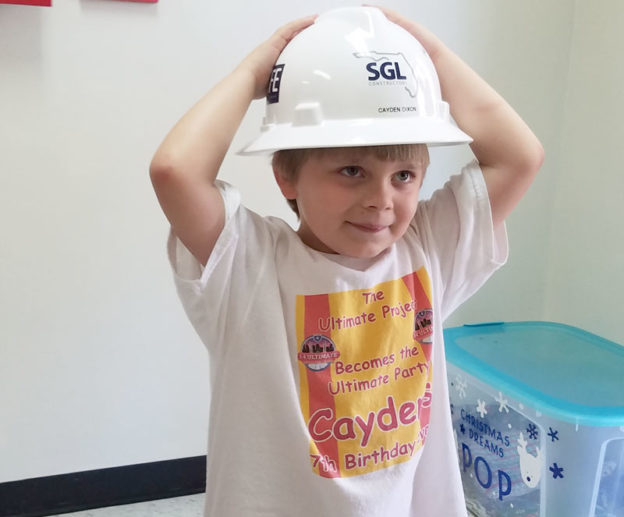 He’ll have to wait nine more years before he can drive on any highway, but a 7-year-old named Cayden is so fascinated by the I-4 Ultimate project that he keeps asking his parents, “Are we going on I-4?”

In an email, Cayden’s Dad explained, “As we ride, he studies and notices the improvements: the freshly painted lines, the shifting lanes, the new entrance/exit ramps. He notices where the ‘working men’ are at and what vehicles they are using on any given day. For him, a ride through the traffic on I-4 is nothing short of an adventure.”

As Cayden’s birthday approached, his Dad contacted the I-4 Ultimate team through the project’s website to share his son’s enthusiasm.

This will be your email of the day. I am sure you hear lots of whining, griping, and complaining about delays, construction and changing lanes – this is not that letter! I have a little boy who absolutely loves the I-4 Ultimate Project. He always asks, “Are we going on I-4?”

… He is such a fan that his 7th birthday happens in September. We asked him what theme he wanted for his birthday party this year and without hesitation he said, “Ultimate I-4 party!”

We will be having an Ultimate I-4 Birthday Party to celebrate my son’s (Cayden) 7th birthday. He has to be your biggest fan. So the next time you hear the complaints, remember you have a young fan out there, who doesn’t mind the work and journey it takes on the road to improvement. He enjoys and appreciates every minute of it!

In addition to providing logos, the team decided to celebrate with and educate the young fan and his guests. Team members from SGL — the joint venture of Skanska, Granite and Lane on the I-4 Ultimate project — brought giveaways such as backpacks, magnets and one very special hard hat that was a big hit. But just imagine the youngster’s surprise when seven members of the I-4 Ultimate team arrived with a Road Ranger, emergency response truck and a maintenance of traffic truck known as the Scorpion.

Cayden’s parents had created a little roadway track complete with traffic signs and kid-sized vehicles for the party. His mom and dad also had a cake with the I-4 Ultimate logo in the icing, cupcakes with road signs, and shirts and banners.

Although the I-4 Ultimate team keeps a demanding schedule, members agreed it was fun to spend part of one Sunday helping a small fan with a big curiosity. In a thank-you email, Cayden’s Dad shared that their goodnight hug included a whisper, “Best day ever.”