The Big Machines of I-4 Ultimate: The Attenuator Truck 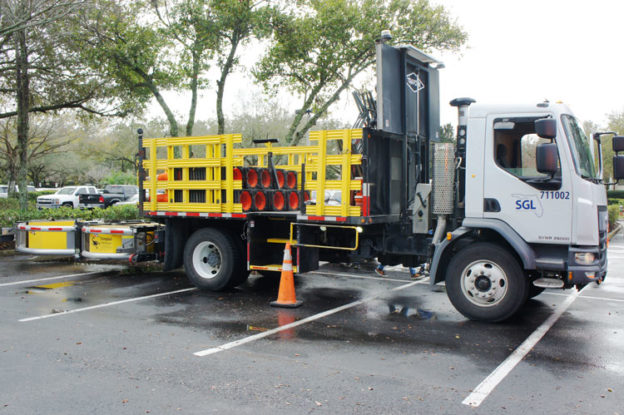 Via @i4Ultimate: Attenuator truck is another big machine deployed on the project http://fdot.tips/Scorp

Safety Features: Large, retractable shock absorber to protect workers, occupants and other drivers in the event of a rear-end collision.

The large, retractable shock absorber mounted on the back of traffic-maintenance trucks comes from a product line called Scorpion. However, unlike the frightening, venomous insect, this scorpion can extend 13 feet, weigh nearly 2,000 pounds and save lives.

The big yellow, collapsible device also is known as an attenuator because of its remarkable ability to absorb rear-end crashes from vehicles approaching at more than 60 mph. In other locales, the shock absorber has successfully defended against the crash of a tractor-trailer when that driver fell asleep at the wheel.

Despite the weight of the tractor-trailer (65,000 pounds) and its speed (70 mph), occupants in both vehicles walked away with only very minor injuries, according to the manufacturer’s statements. Fortunately, the attenuator trucks used by the I-4 Ultimate team have not had to be put that test. But SGL – the construction joint venture of Skanska, Granite and Lane – purchased seven of the vehicles to protect workers and motorists.

SGL ordered the trucks with a special combination of safety features. David Feise, the project’s Maintenance of Traffic Manager, and Steve Matthews, the project’s Deputy Equipment Manager, combined their knowledge of what was needed for I-4 Ultimate work and what was available on the market to help design the safety package.

The truck has special platforms so that workers can place traffic cones in a safe manner while the truck is moving and later remove them. For added protection, the cab of the truck includes camera monitors so the driver can see workers in the back of the truck without turning around. An intercom system allows those in the front and those riding in the back to communicate easily in heavy traffic and construction areas.

In addition, a flashing arrow sign can be raised and lowered from the truck to alert approaching drivers that they need to keep to one side.