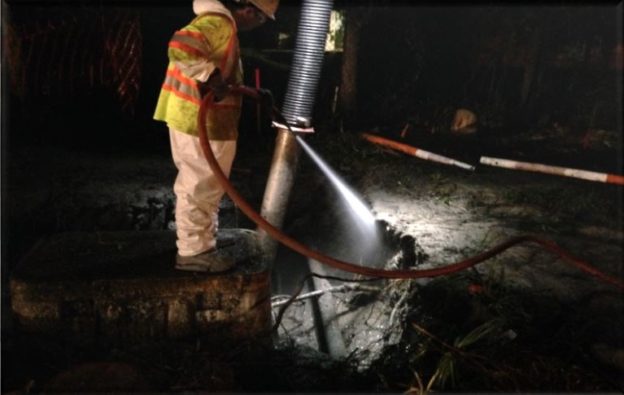 It’s not uncommon to spot a construction worker using a shovel or operating heavy machinery to dig.

But have you ever seen someone use a vacuum?

Travel within the 21-mile limits of the I-4 Ultimate project and you might spot one of three unique vacuum excavation teams.

Large trucks equipped with a powerful vacuum and 3,000 gallons of water to soften dirt and excavate areas where shovels and heavy machinery cannot be use, said Larry Hill, telecoms utility engineer with SGL Constructors, the design-build joint venture of Skanska Granite and Lane for the I-4 Ultimate Project.

The dirt is stored in the truck, and later removed from the site as needed

The innovative method saves time guessing where utilities are located and mitigates the risk of cutting into a company’s wiring and disrupting operations. Ultimately, the process is much more efficient and it saves money, said Hill, who previously worked for utility companies like AT&T.

Generally, vacuum excavation is used for smaller areas to avoid damaging utility conduits. Hill had the idea to use them for much larger areas — like a 150’L x 40’W x 4’D hole that housed a handful of fiber optic utilities at a major hub site in Maitland.

“I looked at this and knew it could have been an expensive repair if utility lines would become damaged, and it may have taken a ton of time to carefully dig them out by hand or machine,” Hill said. “You have to be creative, and think outside of the box. I looked at it and suggested vacuuming it out, and management went for it.”

Hill’s decision was taken into consideration, and teams eventually were dispatched to uncover utilities.

“The vacuum excavation is not abrasive, it’s quicker and you can’t really damage anything,” he said. “There’s no splicing, and there’s no service outages.”

To date, teams have used the vacuum method on two other locations, and there are applications beyond just utility work.

“It’s been used mostly for utilities, but we also use it to clean out drainage,” Hill said. “If we have some drainage and it’s filled with debris or dirt, we can just suck it all out.”

“Oh, we moved it alright,” Hill said. “Think of it as a Shop-Vac on steroids.”